When I heard about a London afternoon tea accompanied by live opera I was more than a little keen to try it. Especially when it’s in such an iconic building.

The Verdi Kitchen restaurant at The Royal Albert Hall wraps around the Grand Tier (first floor) at the back of the building above the south entrance.

It’s certainly a wonderful location for my favourite meal of the day.

As everyone pre-books, once checked-in, you are walked to your allocated seats. There are crisp white tablecloths with different vintage crockery on each table. Our cups were pale green and stamped ‘Made in Czechoslovakia’ so they were definitely pre-1993. 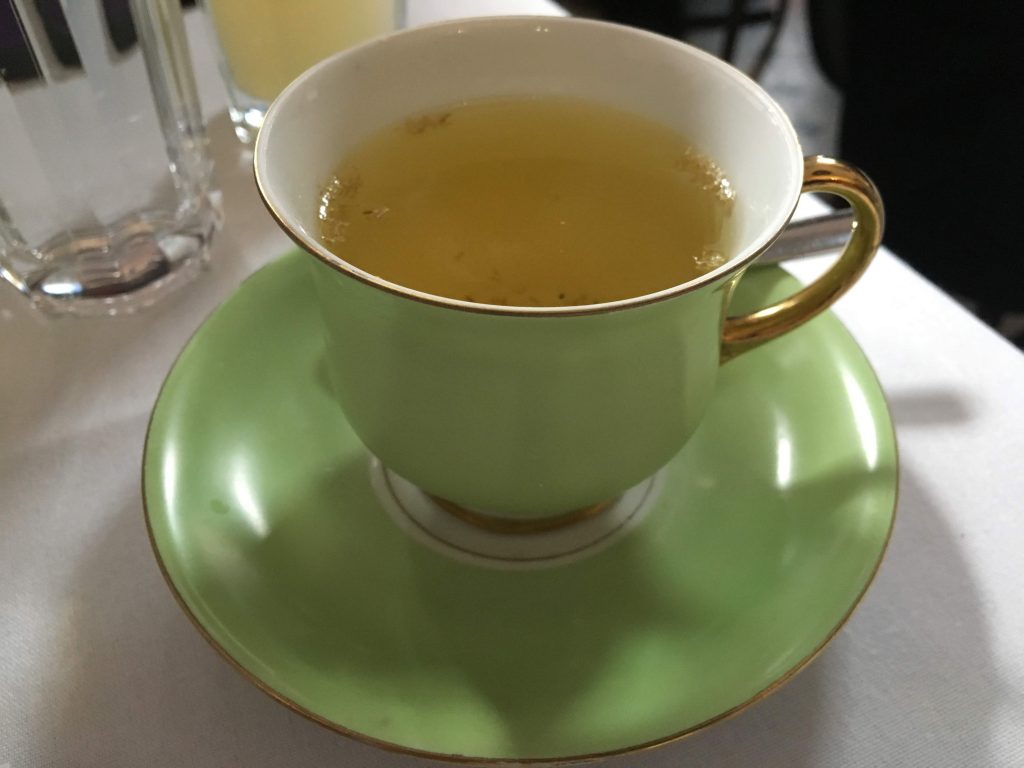 We soon discovered quite how tightly we were packed in as the central tables had to be at an angle to allow anyone to pass. Even so, we were knocked every time anyone needed to get by.

It was only later that I realised that there were two rooms being used for serving afternoon tea. And while we were in the one closer to the opera singer the other room was much more spacious. Later I came to think if it as the preference to being in the mosh pit down the front of a gig compared to watching from the bar at the back. I’m sure those in the larger room were able to enjoy the live entertainment just as much.

If would have helped if there was a coat stand in the more spacious room for us to use as it was a cold day so we all had thick coats hanging over our chairs which didn’t help with the limited aisle space. But there wasn’t. 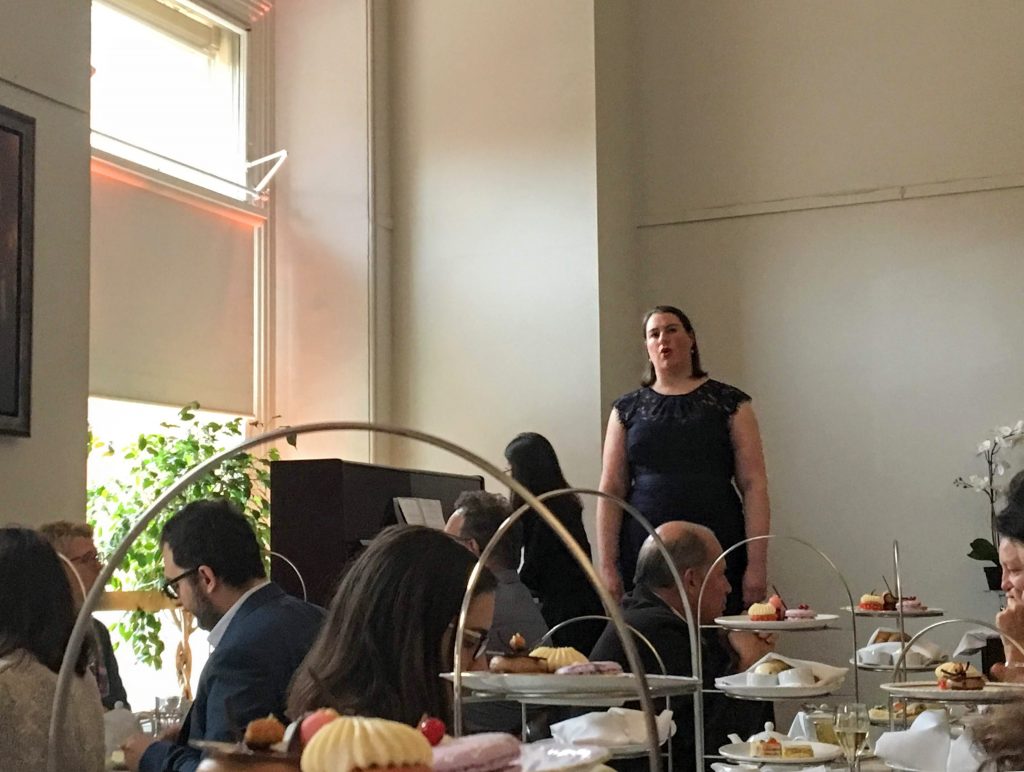 I won’t dwell on the limited space too much but it was clear the waiting staff were finding it a problem as they needed to bring drinks and cake stands to all of the tables.

After being seated for ten minutes I asked for the tea menu as the cardboard menu on the table was the food only. As I had looked online before arriving, I knew there was a selection of teas listed in the full afternoon tea menu. There were clearly limited copies of the full menu available as I was given one to share with my companion. I was also informed that the special 1871 blend, created exclusively for the Royal Albert Hall to mark its inauguration year, was not available. But the server was able to make a tea recommendation and we were told coffee or soft drinks could be chosen, if preferred.

The East India Company teas are all loose leaf and there were silver tea strainers on the table.

When we knew our drinks were on their way we started to worry about how we were would fit the cake stand on the table too. As cake stands were arriving we could see the adjustments needed to be able to put it down. We decided to ask the server to take the milk jug (it was slightly unusual to see that on the table when we arrived), the sugar bowl, a tea strainer and my friend’s cup and saucer as she had chosen a cold drink.

We make the right decisions as there was then just enough space for the cake stand to fit in too.

The cake stand was your classic three tiers with sandwiches at the bottom, scones in the middle (wrapped to keep them warm) and cakes on the top.

The server asked if we had any food allergies so I let her know I would need vegetarian sandwiches.

When the cake stand arrived – just as the opera singer started singing – there were only vegetarian sandwiches. I pointed out my companion hadn’t asked for them and the plate was whisked away. She returned soon after with the veggie and non-veggie sarnies on the same plate. (She also wanted to talk us through the cakes on the top of the cake stand then which was somewhat awkward as no-one was talking in the room as the opera singer was performing.)

Not to worry, I just moved my sandwiches to my plate. 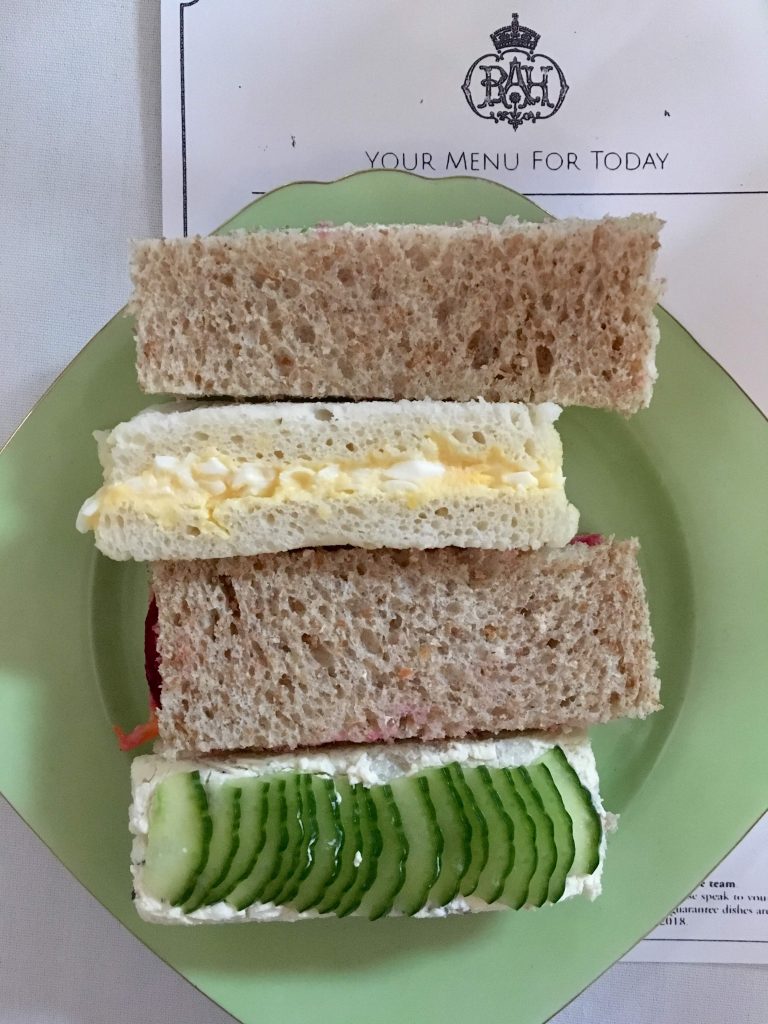 The finger sandwiches were good and I really liked the way the cucumber was on top of the cream cheese and mint sandwich in thin slices.

Each diner gets two scones each: one plain and one fruit. Both were a good size and both separated in half easily (a sign of a good scone). They were slightly dry but we countered that with plenty of clotted cream and strawberry jam. 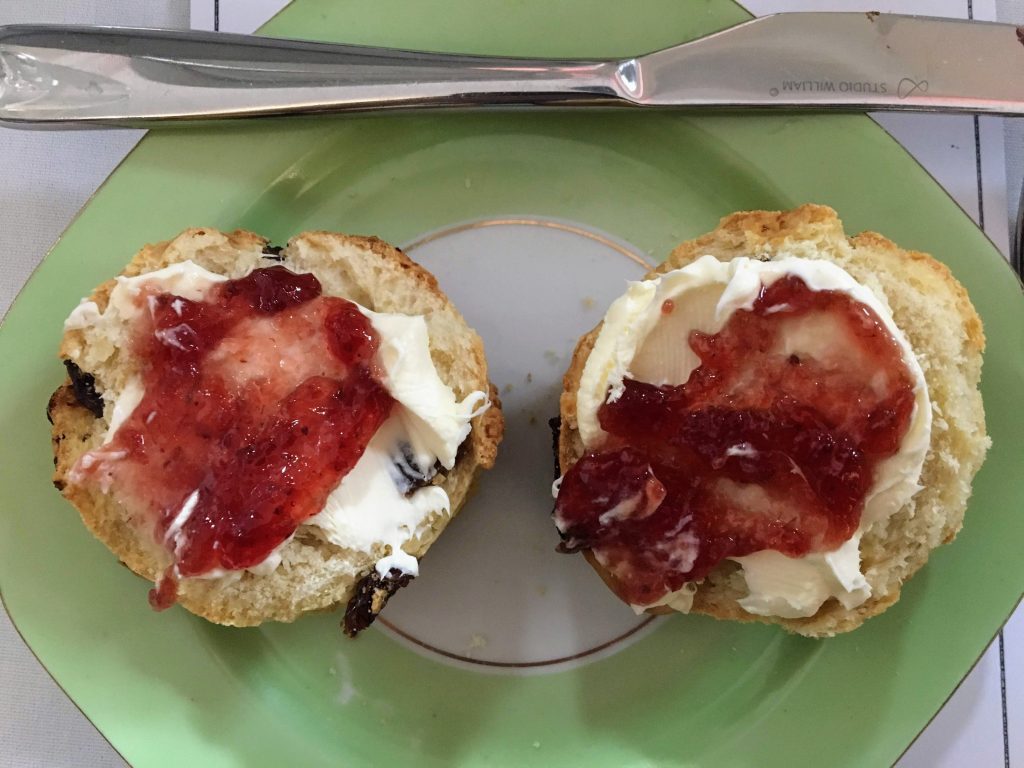 The six cakes were beautiful, especially the violet cassis macaron and the mini cupcake with a fruit filling. 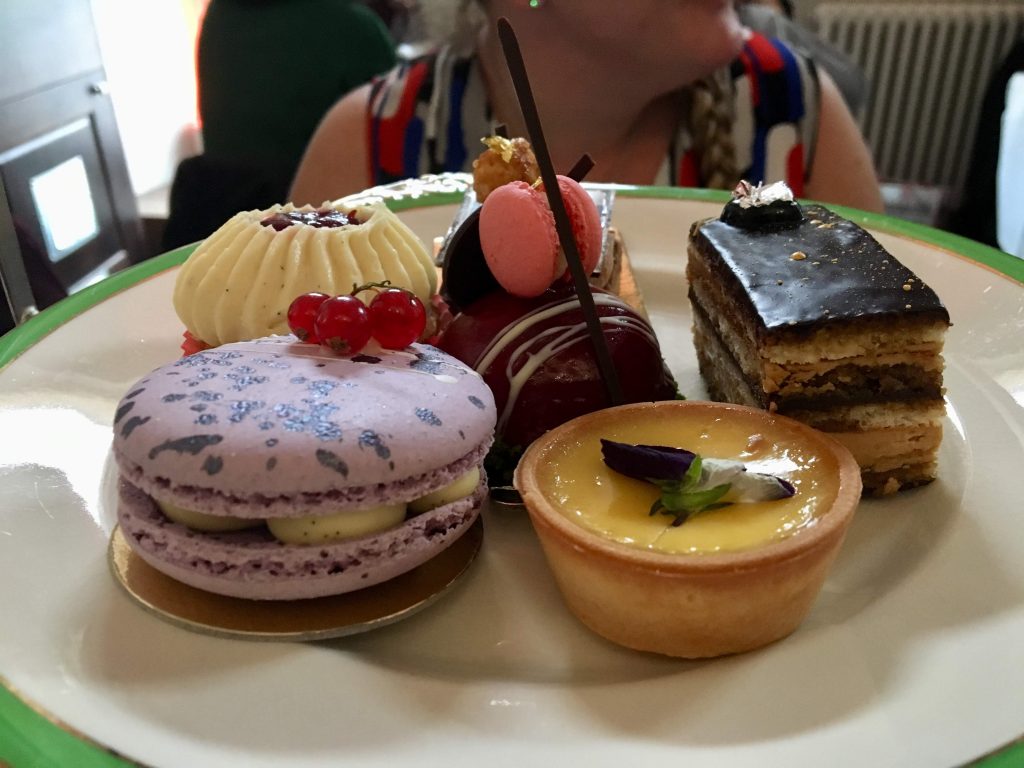 The centrepiece of the sweet selection was this little lovely with a tiny pink macaron and the RAH logo on a dark chocolate disc. 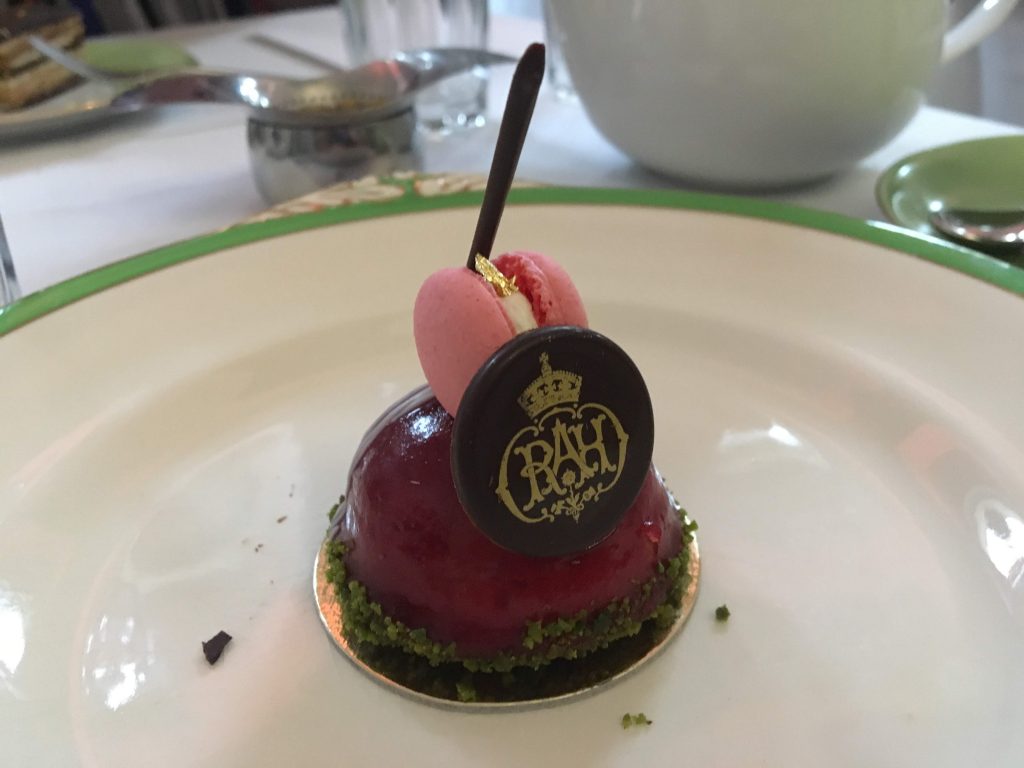 It was a little odd when servers removed the plate for the sandwich tier of the cake stand. (I guess the kitchen wanted a headstart on the washing up?) And there wasn’t an option to change our plates between courses so I used the plate from the cake stand that had the sweet treats on as my dining plate later in the meal.

The opera singer was accompanied by a piano player and both were clearly experts at what they do.

We had four tunes and then a break before they came back to perform four more. I didn’t know all the songs but that didn’t make them any less enjoyable. The singer introduced the songs and performed them confidently with wonderful humour too. The room was silent while she sang so I can be sure the rest of the diners were just as mesmerised.

Doors open for afternoon tea at 2.30pm so you really want to arrive then to get your tea and cake stand before the opera performance starts at exactly 3pm.

As there are two rooms, I’d recommend when booking to request a table in the more spacious room, closer to the entrance.

If you’re wondering who goes to the Royal Albert Hall for afternoon tea with live opera I can tell you it’s couples, friends and families (including young children). So I can confirm all ages enjoyed this treat.

Afternoon tea with live opera is part of the Live Music and Food series and is not available every weekend. 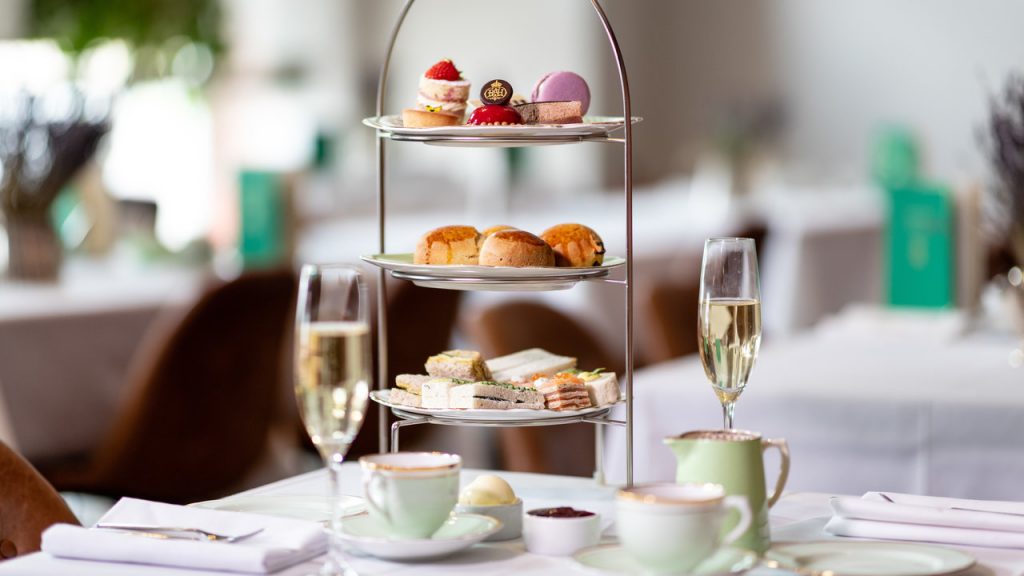 Afternoon tea is my favourite meal of the day so I can be highly critical. That doesn’t mean I didn’t enjoy this afternoon tea. Far from it, as it was lovely! To have live opera while you nibble on dainty cakes is a wonderful indulgence. Would I go back? Too right I would. 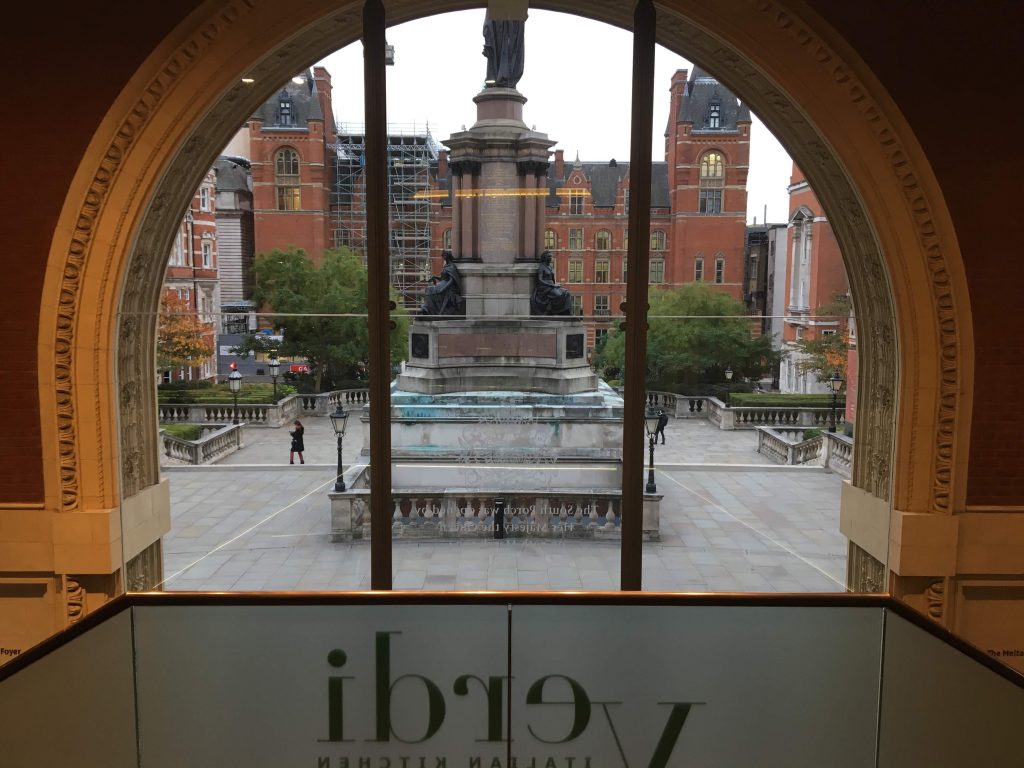 For an alternative, you might also enjoy afternoon tea at The Crusting Pipe in Covent Garden. It’s on the Lower Ground level of the Market Building and there’s an outdoor terrace where you can enjoy the live musicians and singers. On a cooler day, I’ve sat inside by the windows and listened to opera singers while sipping tea and scoffing cakes.