(2016 Update: I’ve been back to the London Aquarium. Find out what I thought this time.)

I’d heard Sea Life London Aquarium has a new exhibit of sea dragons so it seemed like a good time to return. The picture I’d seen was amazing (see below) yet I understood why their recent survey found that 96% of children asked thought a sea dragon wasn’t real. 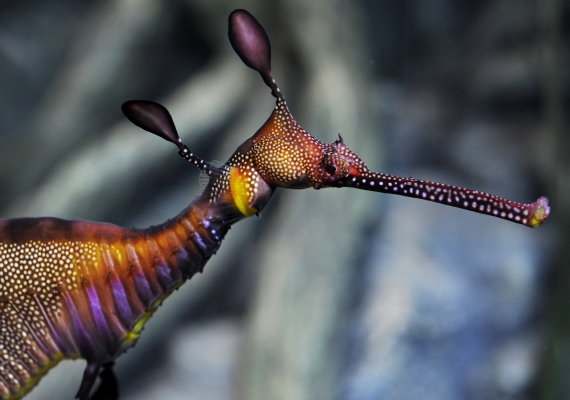 A sea dragon most definitely is real and can be up to 45 cm but the ones to be seen here are about 10 cm. The new ‘Sea Dragon Kingdom’ has weedy sea dragons, alligator pipefish and yellow seahorses. But back to them soon. What was it like visiting London Aquarium on a Sunday morning at the end of a school holiday?

Answer: Busy. I expected it to be busy but I soon realised it was so busy I couldn’t really see anything. I think this was less to do with the end of the school holiday but more to do with toddlers and buggies as under 3 year olds go free so it’s a great age to take them.

In the first section I literally saw nothing but we’d had this problem before as it’s exciting when you arrive so my 8 year old and I went through to see the rays. As visitors can stand on four sides of this tank we did get to see them for a few minutes until my daughter spotted the rock pooling area which she remembered from our last visit. Here, young visitors can touch a starfish and there’s a member of staff to tell you more about them.

And this is what was missing everywhere else. If I got a glimpse of a tank I couldn’t see the information caption or vice versa. There was no-one around to explain more to distract visitors from crowding around every tank. I think there needs to be more distractions to keep younger visitors happy and to allow all visitors to see into the tanks. Distractions could be tables with things you can touch and a member of staff to explain. It could be lift the flap and learn something boards. It could be something more hi-tech with iPads/touch screen technology. But with the only focus in each area being the tanks it means every visitor is trying to get to the same place.

At the penguins there has been an attempt at this type of ‘other distraction’ with a listening activity before going through to see the penguins but when we went through all I saw was a wall of toddlers blocking all of the water and then a second barrier of their parents. I saw the top of a penguin when it came out of the water and dived back in but part of the joy of this area is to see them underwater too.

There are a few activities right at the end of the attraction but that area is always quiet so it would be great to scatter those ideas throughout the trail.

I do realise if you go to an aquarium you expect to see fish and sea creatures but the speed at which we got around the attraction was a real shame as we saw so little. Last time we were there it took us just over an hour which I thought was fast. This time it took 45 minutes – and we then spent 15 minutes in the gift shop. I do think some of that speed was because there’s nowhere to sit and watch the fish, or to have a rest, so if you can’t see it makes sense to just move on.

The staff we did speak to (at the entrance and in the gift shop) were great but there simply weren’t enough within the attraction. I saw one member of staff at the rock pooling and two cleaners. There was the ‘get your photo taken’ team but no staff who visitors could ask about the fish and sea creatures.

And the need for more cleaners than on the visitor team made more sense when a large family sat down opposite the crocodile – literally the first seating I’d seen in the attraction – and proceeded to have a picnic. While dad was shouting, “Who wants a banana and who wants a apple?” and mum was dishing out the food my daughter looked at me in shock as even an 8 year old knows it’s no food and drink at the London Aquarium. As cans of drink were opened and sandwiches appeared we moved on. But other families starting looking at their kids asking if they were hungry and snacks came out of bags and from under buggies. And with no staff in the area who would stop them?

Another point to remember is how dark it is inside the London Aquarium (so hold on to those little people!) It’s easy to get disorientated and some arrows on the floor would certainly help, especially when coming out of the lifts as the stairs and lifts may not always arrive at the same place.

When we reached the last floor we found a completely empty – and rather smelly – ‘Thames Walk’ section and we were soon in the gift shop feeling strangely disappointed. As we left the gift shop we had to battle our way across a sea of European teenagers and the unpleasant smells of McDonald’s which was particularly grim. And that’s the only way to leave the building.

Based on this experience, London Aquarium doesn’t feel like good value for money with the current set up. The ‘on the door’ prices are: adult: £26.50, Child (4-15): £19.95, and 3 and under go free. You can save 10% by booking online and there’s a free ticket deal with Kellogg’s cereals.

As a comparison, London Zoo ‘on the door’ ticket prices are: adult: £27, child (3-15): £19, and 3 and under go free. That’s pretty much the same price and yet I spent over five hours at London Zoo last week and we still didn’t see everything.

Oh, and I haven’t told you what I thought of the sea dragons. Well, I missed them. I did see an information label but couldn’t see anything in the tank. I watched a bit of weed but looking back at the picture that’s not what I saw so I think I did just see a bit of weed. I didn’t realise I was in a ‘Sea Dragon Kingdom’ zone as I saw no signs. I did see a few seahorses though.