Why does a street in Bloomsbury have metal trinkets embedded into the pavement? Many people walk along this side street and don’t notice these unobtrusive decorations but they were placed there as a permanent public art installation in 2010 called “Tokens” by John Aldus. 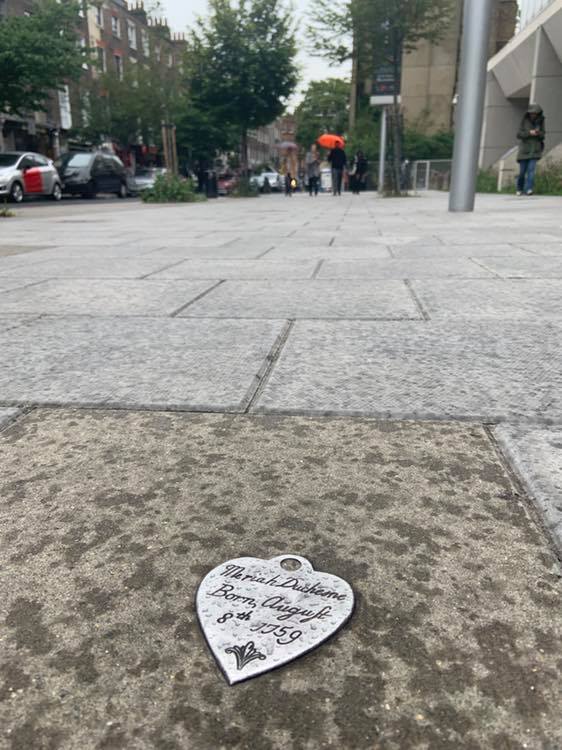 While I often advise on looking up in London to see the unexpected, in this instance looking down is very interesting indeed. There are twenty artworks to notice and they are replicas of tokens held at the nearby Foundling Museum.

The Foundling Museum tells the story of the Foundling Hospital which cared for abandoned children in this area from 1739 to the 1920s. The hospital was set up by Thomas Coram who was a pioneer in child welfare. He was supported by the artist William Hogarth and the composer George Frederic Handel. Each left a lasting legacy as Hogarth convinced well-known artists of the day to donate paintings to the Hospital and wealthy people would then pay to see them thus creating the first art gallery in London. Handel gave annual fundraising performances of Messiah at the Hospital chapel, and his Will and scores of his work are on display at the Museum.

Coram is a children’s charity that took its name from Thomas Coram to remember all he did to support vulnerable children. There is also the fun free central London playground nearby, Coram’s Fields.

Back to those tokens. Why tokens? It can be hard today to imagine the desperation mothers felt at not being able to care for their children. There was no social welfare and there were three major wars in the 1700s so mothers were often left alone and unable to support their family.

As there were so many children who needed care, not all could be accepted at the Hospital. There was a ‘pick a ball from a bag’ system to see if you could join the queue that day. If you got the right colour you stayed, otherwise you had to try again and hope your child didn’t die before you could return. A white ball meant your child would be checked to see if they were deemed able to survive through medical tests and permitted into the Hospital should they pass. A red ball meant you re-entered the ballot should a mother’s child with the white ball fail the medical test. And a black ball meant the mother was immediately escorted off the premises with their child.

There were then further strict admittance rules as the child had to be under 12 months old, illegitimate, the mother’s first child and from a mother of good character and who had a reasonable chance of getting an honest livelihood if the child was taken care of in the hospital.

So, why are those tokens along the pavement? Each child that was accepted at the Foundling Hospital was given a new name but the mother would leave a token to be recorded to help identify their child if they were ever in a position to return and collect them. The tokens were never given to the children and were kept wrapped in a piece of paper with the admittance information and filed by date order. Sadly, the tokens and register were later filed separately making it even harder for children to be claimed if their parents’ circumstances changed.

The tokens were small trinkets such as buttons which might show that the father was in the army or small pieces of fabric that could be matched up with the rest of the pattern if the child was ever collected. Thimbles might express the mother’s love even more strongly as dressmaking might be her livelihood and she would be reducing her ability to work by leaving something so valuable with her abandoned child. Coins with added notches to personalise them were sometimes used as tokens and some tokens were designed and engraved especially with as many clues to the identity of the parents as could be included in such a small item. 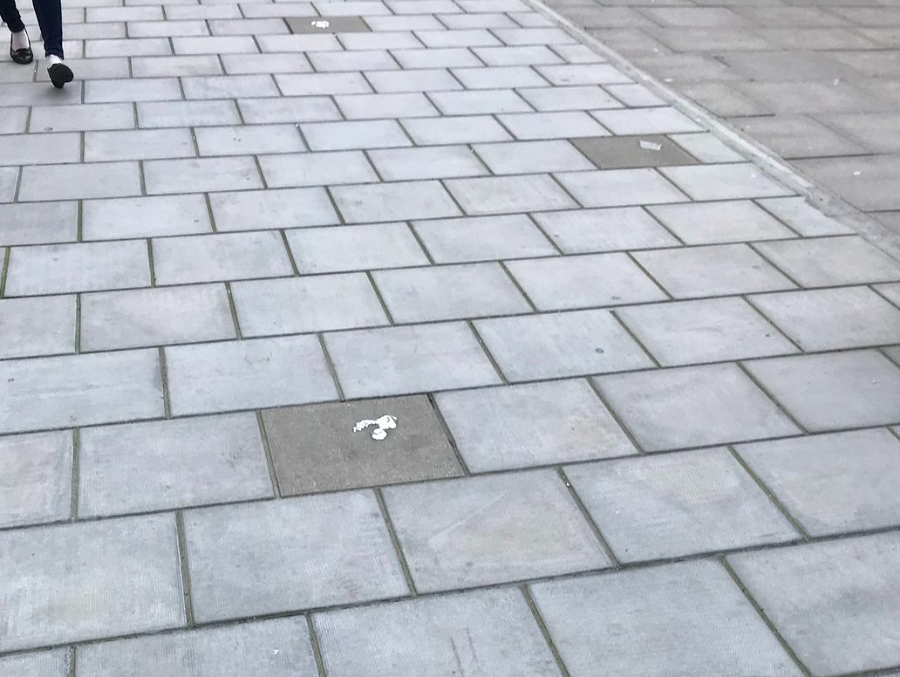 Marchmont Street is named after the 2nd Earl of Marchmont (1675-1740), one of the founding governors of the Foundling Hospital. The metal representations embedded into the walkway show symbols of hope from eighteenth-century women; they show love and the strong desire to give their child a better life than they could offer them. So what seems like very little today actually signifies a lot of social history and a very emotional story.

How to Find The Tokens

The nearest tube station is Russell Square. Cross over the zebra crossing right outside the tube station and Marchmont Street is straight ahead (just to the right of Tesco). The tokens are on the right-hand side as you walk up the street. The metal tokens here are enlarged replicas of real tokens on display in the Foundling Museum.

On Marchmont Street, just after the tokens, is Alara, a great Healthfood shop with an excellent fresh salad take-away. The Brunswick Centre is popular for shopping and the Foundling Museum and Coram’s Fields are on the other side of the Brunswick Centre.

When the tokens were added further landscaping improvements included the addition of an avenue of seven ornamental Amelanchier Lamarckii trees and better lighting.

Previous Post: « Top 15 Most Instagrammable Places in London
Next Post: What To Do When A Loved One Dies »