The Roman history of London has long been known about but with so much hidden under buildings, it’s hard for archaeologists to discover new finds. In June 2017 a Roman sarcophagus burial was uncovered in Southwark, SE1.

The sarcophagus, and the bones of the woman found inside, are the star exhibit of the Roman Dead exhibition at the Museum of London Docklands (on until 28 October 2018). Carbon dating her bones has shown she was buried between AD 86 and 328 and was in her 30s when she died.

It’s believed she was one of the 1% elite in Roman London society. A large crack in the sarcophagus lid occurred when her grave was robbed and her skeleton is now missing her right arm and both feet. I wondered if this was to remove jewellery but we’ll never know. She would certainly have been buried with ‘grave goods’. 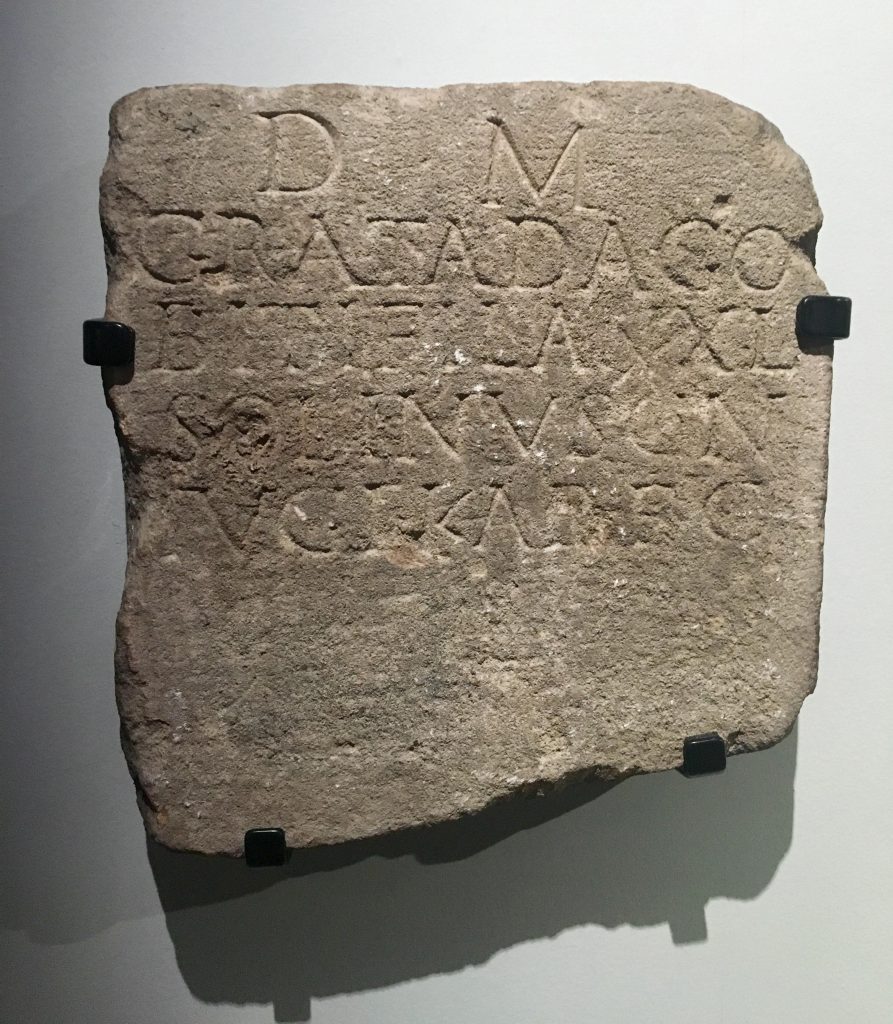 The exhibition brings together 40 years of research and archaeological work in around 250 objects. It’s the first exhibition of its kind to explore the beliefs, rituals, deaths and burials of ancient London.

The exhibition helps us reflect on who Roman Londoners were. Of the eighteen people found in Lant Street, SE1, four were Black African. The city already had a diverse population with African, Greek, Italian and Spanish ancestry discovered. All of this shows the city’s international connections but can you imagine how arduous travel must have been at the time? 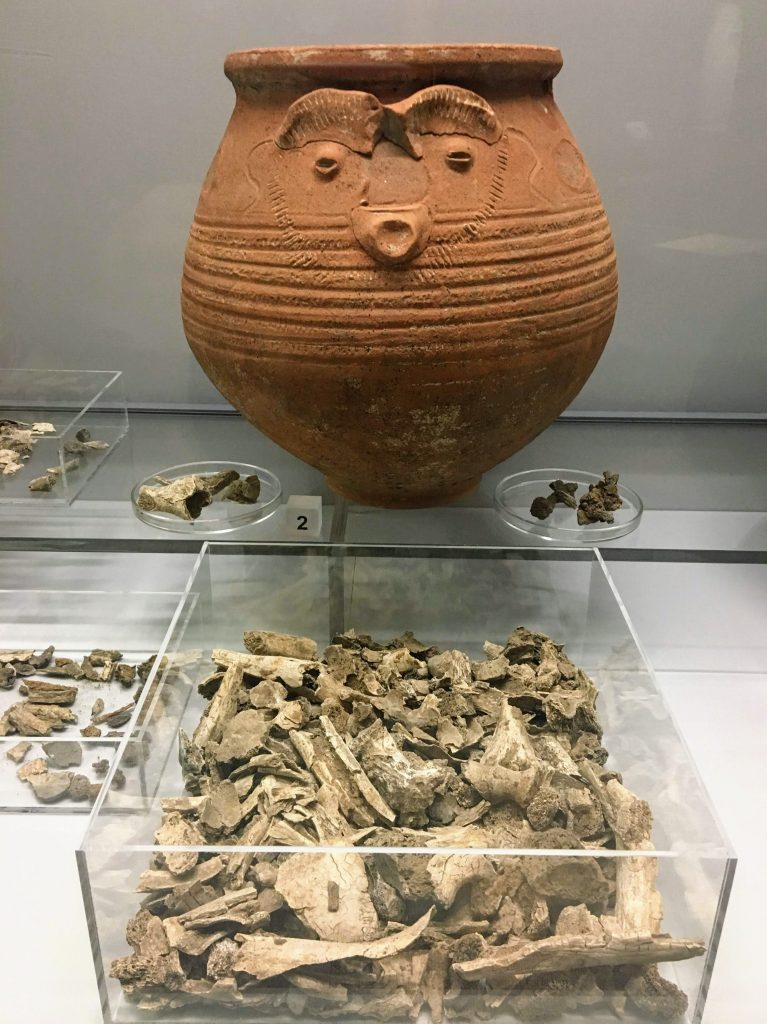 The exhibition explains about Roman inhumations (burials) and cremations. Funerals and burials usually took place 2-7 days after death and, as the presence of the dead was believed to be unclean due to religious beliefs or superstition, all dead were moved outside of the city walls.

Cremation remains were poured into pots (like the one above) and then buried. Many of these were found in the sixteenth century in Spitalfields when clay was dug up to make bricks. In this display we can see cremation urns and burnt human bones.

There are skeletons and cremated remains of over 27 people on display. You can see injuries on the bones such as rehealed ribs, broken legs and violent blows to the head. Food scraped from plaque on teeth has been used to discover what they ate. And in a wooden coffin base, you can see impressions left by the knees and ribs.

There’s a section on infant death that is partitioned off in a corner. My 12 year old daughter thought the whole exhibition was fascinating but felt this corner was very sad.

The museum has supplied magnifying glasses so you can look at the objects in more detail. There’s a ring with an intaglio of a town mouse and a country mouse dining together – a scene from Satires by the Roman writer Horace. And you can see the stone from the first date found in Roman London along with a selection of other food placed on a pyre as part of a funeral feast.

The museum has also supplied free headphones so visitors can listen to audio highlights available via the free wifi.

The only negative I have about the exhibition is the poor lighting. The general low-level lighting was expected but the spotlighting was frustrating as there were shadows over the captions when close enough to read.

To explain the Roman funeral process more clearly to children, there is a free family show this summer. Styx, Stones and Roman Bones is on every Wednesday to Saturday in August with three shows each day. (I hope it’ll be back for the October school holiday too.)

Shown above is the tombstone for a Roman woman called Grata. (Her tombstone is in the exhibition.)  In the 45 minute show, you get to find out what happened at her funeral and the reasons why to help her soul cross over the river Styx to the Underworld.

It’s a fun and informative show and we left wanting to go straight down to see the exhibition.

The Museum of London Docklands should be applauded for making an exhibition about death so welcoming to families.

Roman Dead is suggested for a minimum of 8 years old and the family show is for 7 and above. I visited at the same time as some younger children who definitely enjoyed both but I’m pretty confident my 12 year old enjoyed the exhibition more than the preschoolers.

Do note, the popular Mudlarks children’s play area is for up to age 8 years so the little ones still get to have fun. 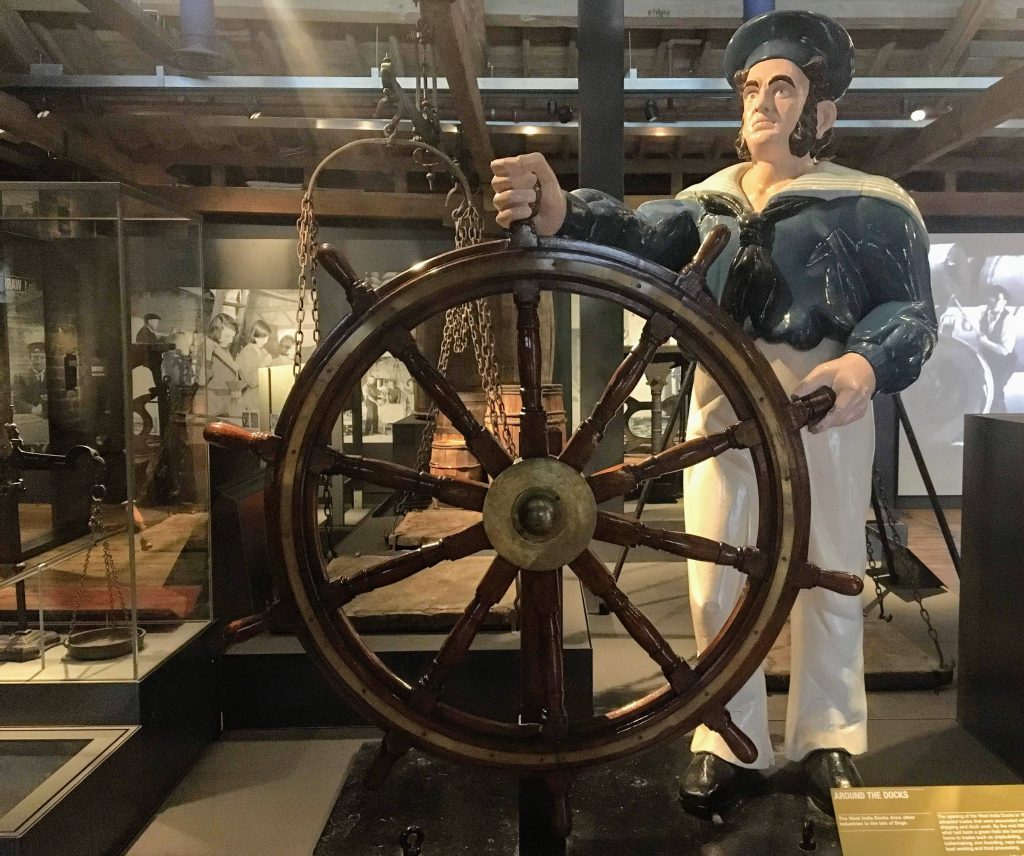 We also went around the permanent galleries and I was really impressed by how much has been added for families along the way. Just tell me you wouldn’t want to try running in this huge wheel too? It’s not just for the kids!

As the museum is the old docklands area of southeast London, do get a seat at the front of a driverless DLR train so you can pretend you’re driving. I always take my own inflatable steering wheel! (Yes, I do know trains don’t have steering wheels.)