St. John’s Lodge Garden is often known as The Regent’s Park secret garden as it is such a peaceful location with few visitors. It’s a garden that was designed to be meditative, providing an elegant counterbalance to the busy pathways of the larger park. It’s also a bit hard to find which helps with the mystique.

Many visitors to Regent’s Park may never find the secret garden or even know if its existence, and that just makes it all the more exciting when you do. 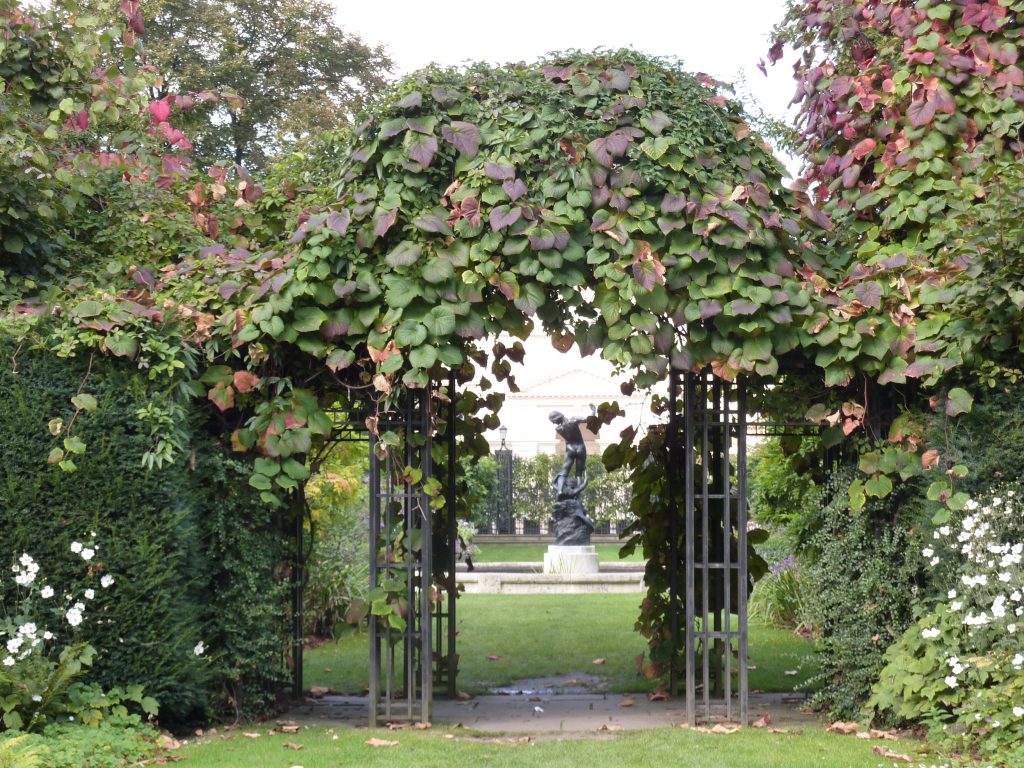 Regent’s Park was designed by John Nash (1752-1835) who was a government architect and friend of the Prince Regent. The large round park included a processional road to Carlton House, which we now know as Regent Street. 56 villas were planned for The Regent’s Park but only 8 were ever built.

The grounds had an informal layout until the 3rd Marquess of Bute purchased the lease to the Lodge in 1888. 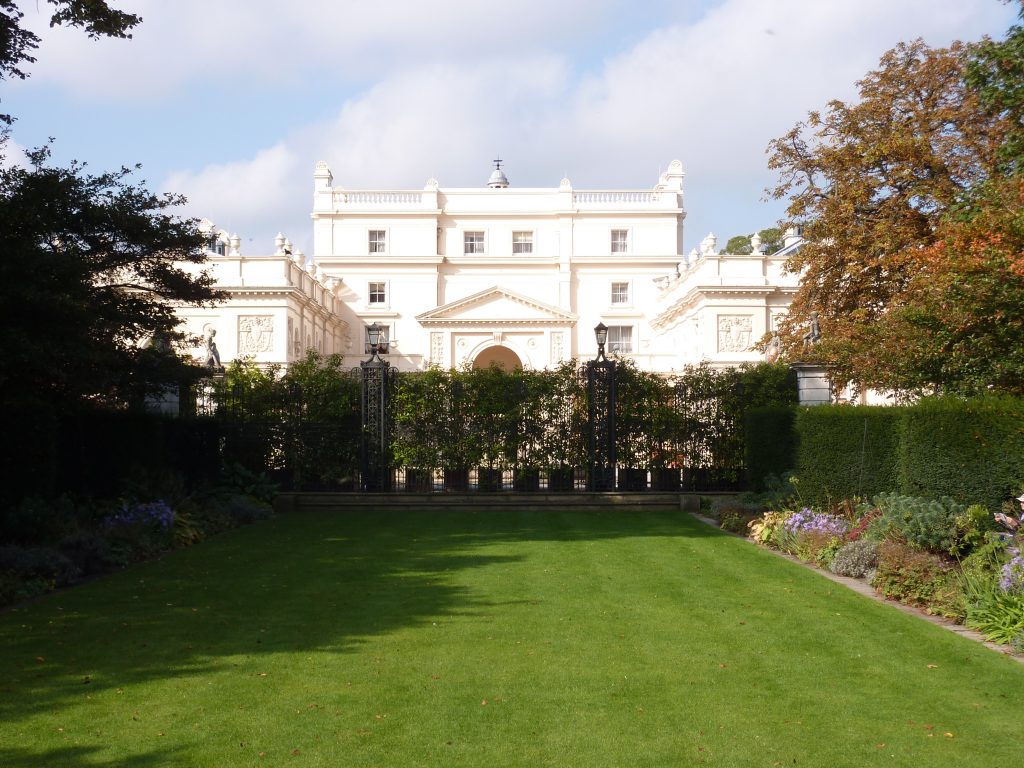 The Bute family did not extend their lease on St. John’s Lodge as some of the land (5.5 acres) was taken back into Regent’s Park in 1916 and it would have made their chapel near the lake inaccessible from the house. The chapel is no longer here but the Regent’s Park nursery was established near the east of the garden and, I believe, that’s now The Regent’s Park Allotment Garden, which is just next door and also open to the public to visit.

During World War One, the villa and outbuildings were used as a hospital for disabled officers, and later, in 1920-37, by the St. Dunstan’s Institute for the Blind. Other occupants include the University of London’s Institute of Archaeology, from 1937-1959, and by the history department of Bedford College, from 1959-1983. A development company, Messila House, occupied the house from 1987-1994 before it was sold for £40 million.

Today the villa is a private residence again, owned by the Kuwaiti royal family and the royal family of Brunei, but the garden is open to all and has been available to the public since 1928. 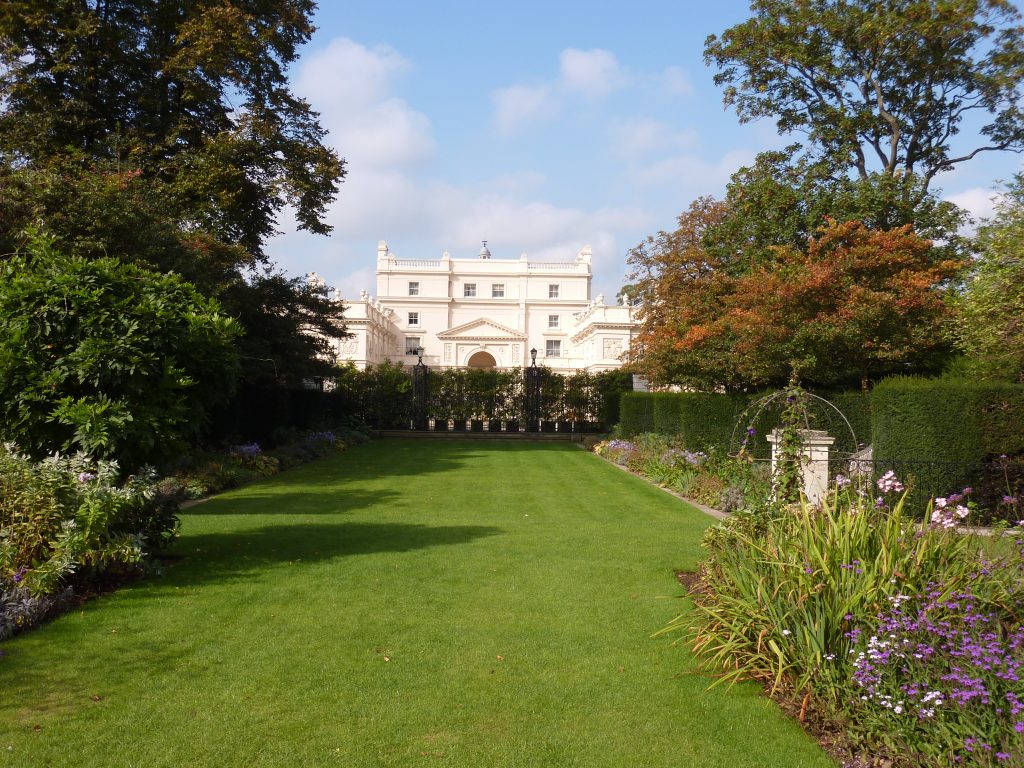 In 1888, Lord Bute commissioned Robert Weir Shultz (1860-1951) to carry out works to the villa and grounds including ‘a garden fit for meditation’.

He used hedges to form enclosures and added a sunken lawn. The garden features reflected both Arts and Crafts ideas and the late nineteenth-century revival of classical art.

There was a central statue of St. John the Baptist as the central point of the circular garden, in the centre of a fountain pond, but that has been replaced with Hylas and the Nymph by Henry Peagram 1933. 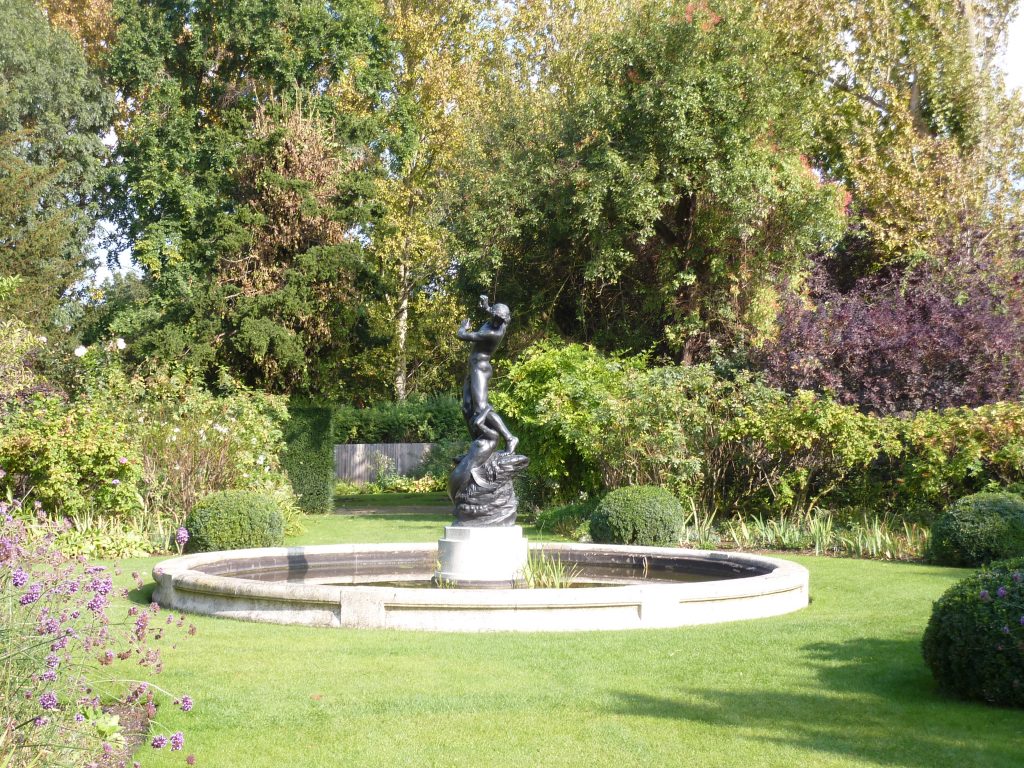 Eventually, the garden became public in 1928 following a government decision that more land in Regent’s Park should be publicly accessible. Despite changes, the garden core retains the quiet reflective mood intended by Lord Bute.

In 1994, the Royal Parks undertook works to strengthen and enhance the character of the garden, and Colvin & Moggeridge were commissioned to complete the works to bring it back in line with Weir Shultz’s design from the 1890s. 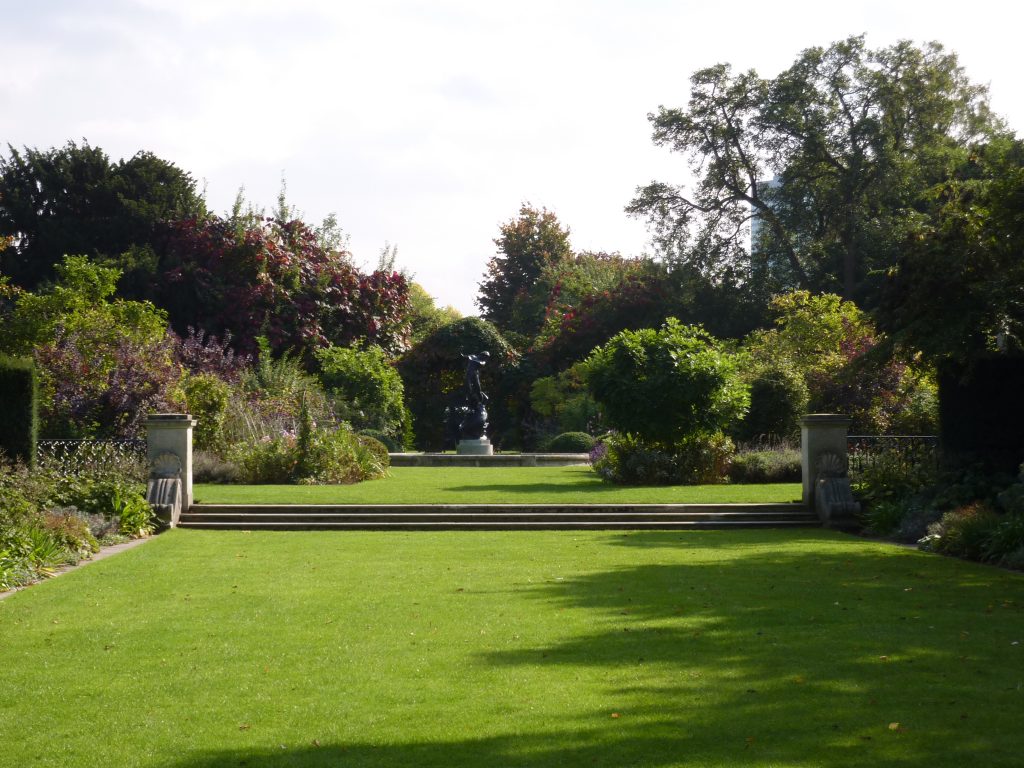 Formal lawns with perennial borders are located off of the central axis. A pergola with climbers takes the place of the long-gone stone loggia, and a covered seat forms the focal point to the axis where a nymphaeum once stood.

A number of new statues and urns were added including Shepherdess by C L Hartwell RA for Gertrude and Bertie Weaver 1931 and The Awakening by Wuts Safardiar commemorating Anne Lydia Evans (1929-99). 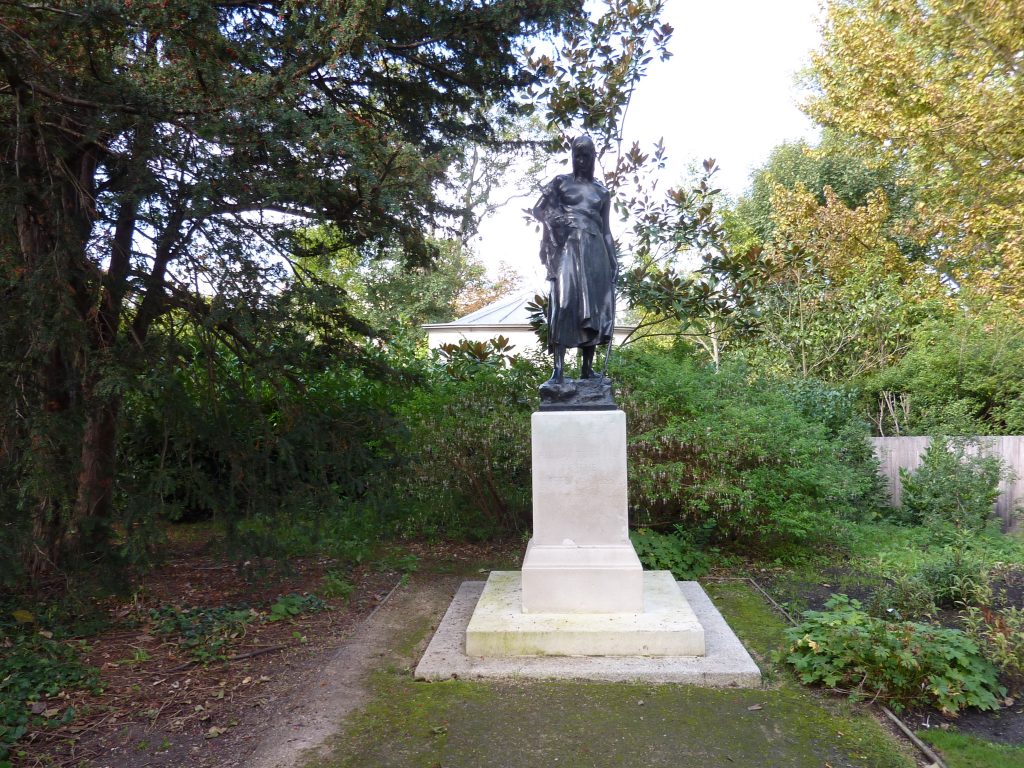 There are also plenty of benches scattered throughout the garden so you can stop and relax. 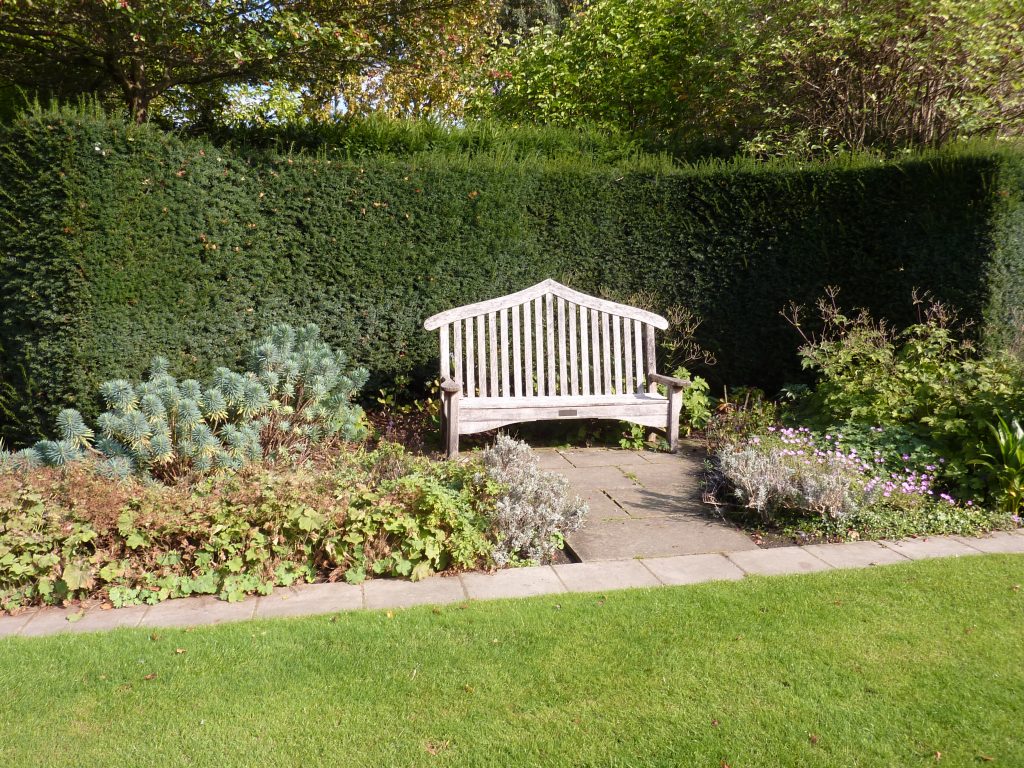 It’s a formal garden that is very well maintained by The Royal Parks. I’m sure the lawns are watered daily as my morning visits always find wet grass all year round.

St John’s Lodge Garden is not very big but that intimacy only adds to its appeal. It’s always a quiet location too with no traffic noise and often very few people.

Very easy to miss, the garden’s entrance is through an open cast iron gate (one open, one closed, usually). It looks like it might be a private garden but you are allowed and welcome to go inside. You are led through an arched pergola tunnel covered with flowers that then allows the garden to open out before you like Wonderland. 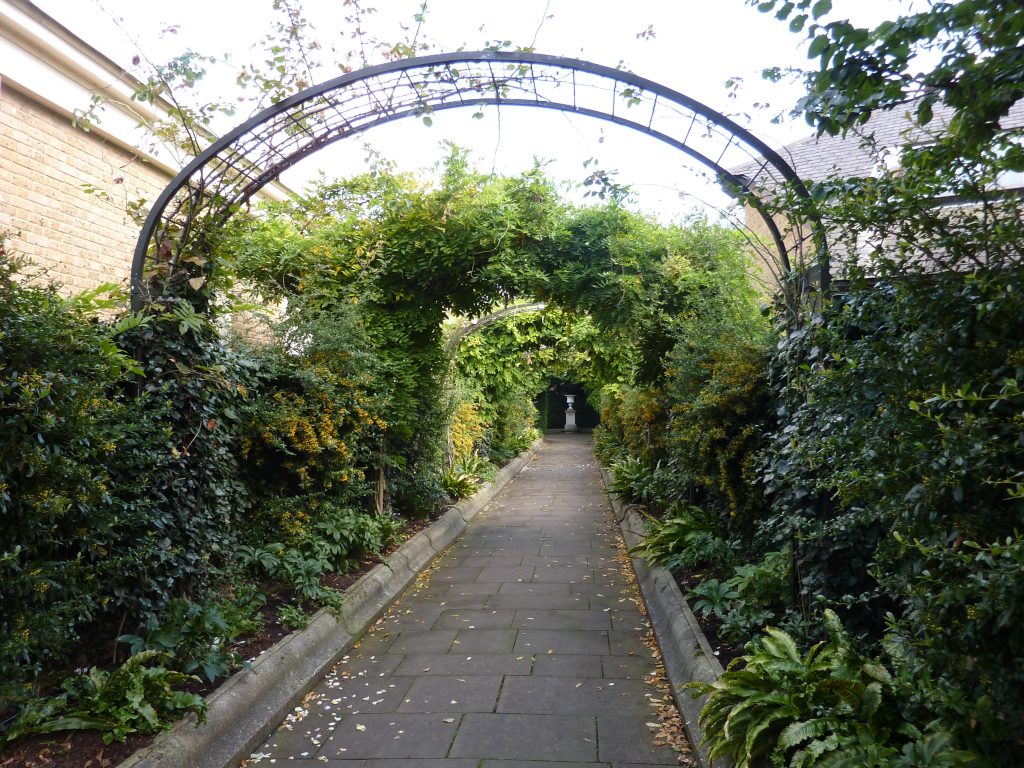 The garden is designed for peaceful relaxation. That means it’s not the place to bring the kids and their scooters. The regulations state no dogs and no ball games permitted in the garden.

When you reach the end of Chester Road and can see ornate iron gates across the road, turn right and you will see the Regent’s Park Allotment Garden on the corner. A few steps beyond you will find the gates for St. John’s Lodge Garden.

The garden is open daily and is free to visit. Its opening times generally match those of Regent’s Park.