You are here: Home / London / London Calendar / How to Apply for Trooping the Colour Tickets

To be in the seated areas at Horse Guards Parade you do need to follow the Trooping the Colour tickets application process.

What is Trooping the Colour?

At the ceremony more than a thousand soldiers and horses from the Household Division parade in front of their Colonel in Chief, Her Majesty The Queen.

The centuries old tradition of Trooping The Colour has been held on Horse Guards Parade to honour the Sovereign’s Birthday almost annually since 1805. Each year the Five Foot Guards Regiments take it in turns to Troop their Colour in front of the Sovereign. Colour is the name given to regimental flags of the British Army. It’s used as rallying points as long ago as the Kings of Babylon.

In the Middle Ages, each Lord or Baron flew his banner as a sign by which his followers could distinguish him in battle. Colours were last carried into action by the 58th Foot in South Africa in 1881. Up to that time they participated in all the varying fortunes of their Regiment; were often torn by enemy fire and acquired an almost religious significance. Even today, uncased Colours are invariably carried by an officer and accompanied by an armed escort.

Isn’t it Free to Watch?

Well, yes, you can stand along The Mall and see the royal family and guards pass by as they are on their way to Horse Guards Parade and that costs nothing. You’ll need to be there early for a good view so arrive by 8-9am for the 10am start, and many people will arrive much earlier. (The carriages, horses and guards have to be at Horse Guards Parade for the 10am start so will pass by before then, of course.) There’s a map showing the best places to stand on the Household Division website.

To be in the grandstand seats at Horse Guards Parade to see the ceremony does take some planning. You need to apply by post for Trooping the Colour tickets in January and February as there is a ballot system.

You need to write a letter (yes, a real letter on paper!) stating how many tickets you would like (up to 3 for Trooping the Colour) and include a stamped addressed envelope. Do not send any payment at this stage. Do note, children wishing to attend need a ticket too.

Send your letter and S.A.E. to:

Applications are received up to the end of February and the ballot is drawn in March. Successful applicants will receive a letter in April with payment details.

Before the Trooping the Colour ceremony takes place there are official rehearsals, called Reviews, that you can also apply for tickets to attend.

The Major General’s Review is the first public rehearsal for the parade. It takes place on the Saturday two weeks before the Queen’s Birthday Parade. I’ve been to see this and the tickets are well-priced. You mustn’t expect the ‘show’ to be as slick as it needs to be on the big day but it’s still very impressive.

The Colonel’s Review is the second public rehearsal. It takes place on the Saturday one week before the Queen’s Birthday Parade.

You can apply for tickets for the seated areas at Horse Guards Parade for these reviews. It’s the same letter writing process but there is no restriction on ticket numbers. As before, you need to wait to find out if you are a successful applicant and then pay for your tickets.

During the weeks leading up to the big event there are further rehearsals on weekdays but tickets are not available. You can watch from St James’s Park. I’ve been in the area before and suddenly seen the guards coming so got a good spot to watch the rehearsal. I even saw a guard faint in front of us in their heavy uniform as it was hot that day. Poor chap! 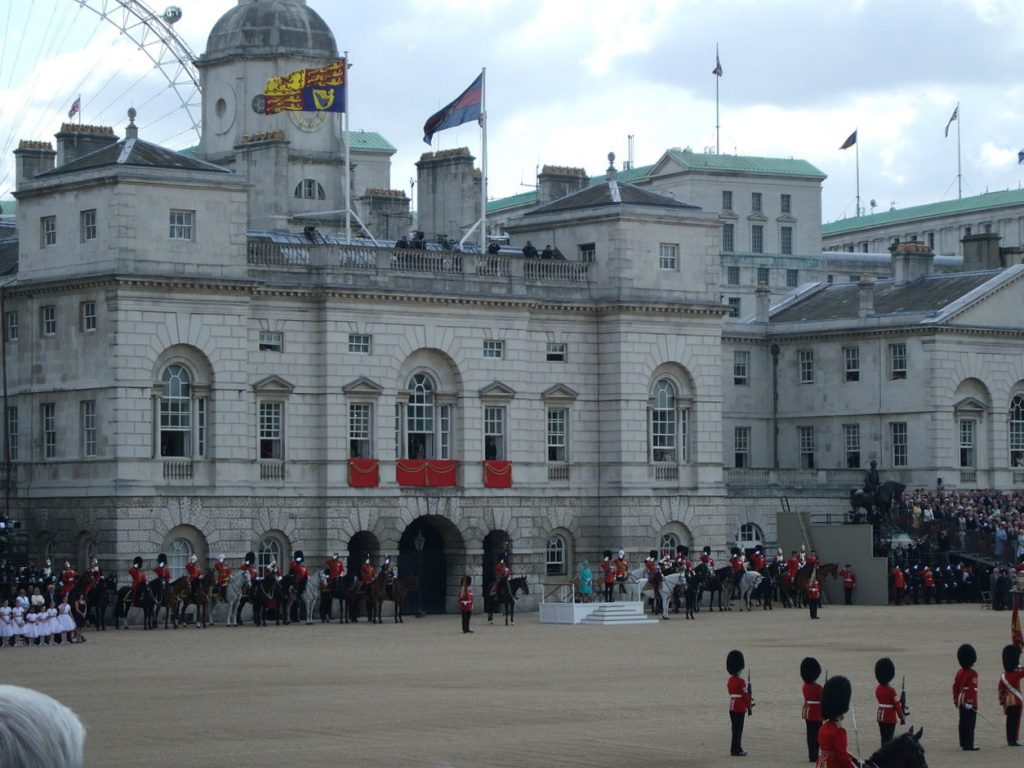 Be aware, there is a strict dress code for attending Trooping the Colour and the official Reviews.

For Trooping the Colour morning dress is expected. For The Major General’s Review you need Lounge dress, and for The Colonel’s Review Smart Casual is accepted. No demin is ever allowed. You can find out more about the dres code (and other great information) at trooping-the-colour.co.uk.

And after all the fun, Horse Guards Parade will go back to looking like this.