You are here: Home / London / London Attractions / London Exhibitions / Fire! Fire! at The Museum of London (2016)

I shared lots of information about the Museum of London Fire! Fire! exhibition a few months ago but I’ve now been to see it so can tell you more. 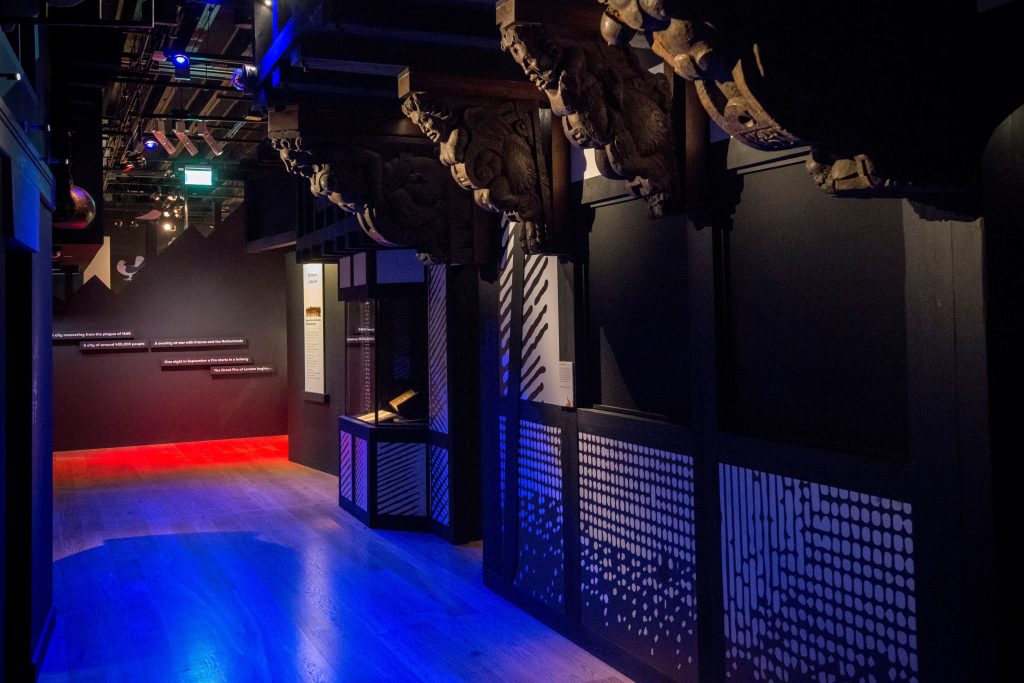 The exhibition route starts with an interpretation of Pudding Lane, where the Great Fire started in 1666. Records show this was one of the narrowest streets in the City.

There are atmospheric sounds (I heard a cat) and smells here too. This area has a waft of fresh bread.

The dark entrance leads to a visualisation of the bakery where the fire started. As the fire grows on the wall you see Thomas Farriner wake up and escape with his family out of the window. 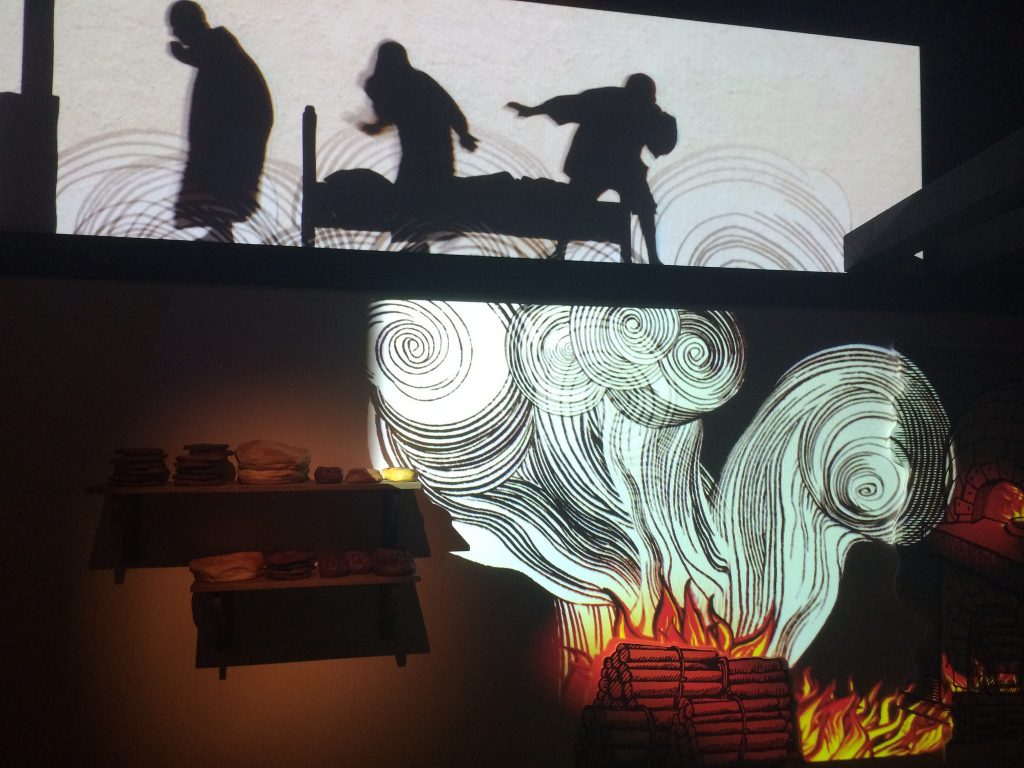 This next section has the timeline of the Great Fire and the centrepiece is a projection of the fire’s daily progress on a large lump of bread dough.

While the fire was essentially out in a few days I was surprised to hear that some areas still smouldered for several months. 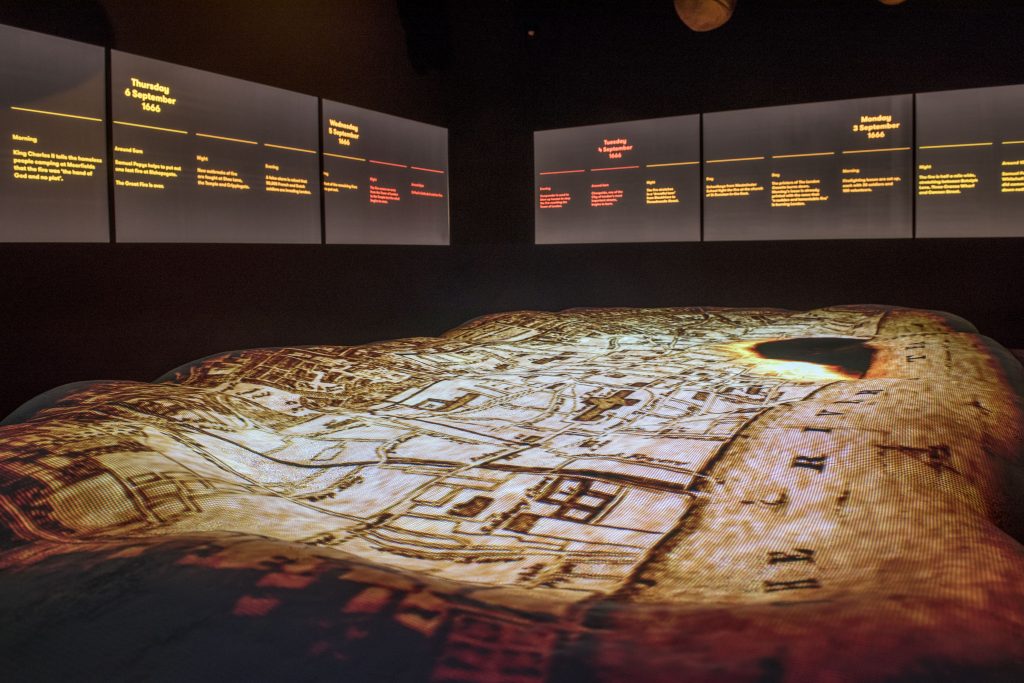 This leads into the main room of the exhibition which has three themes:

There are atmospheric sounds here of a burning, crackling fire with an added aroma too (toast). 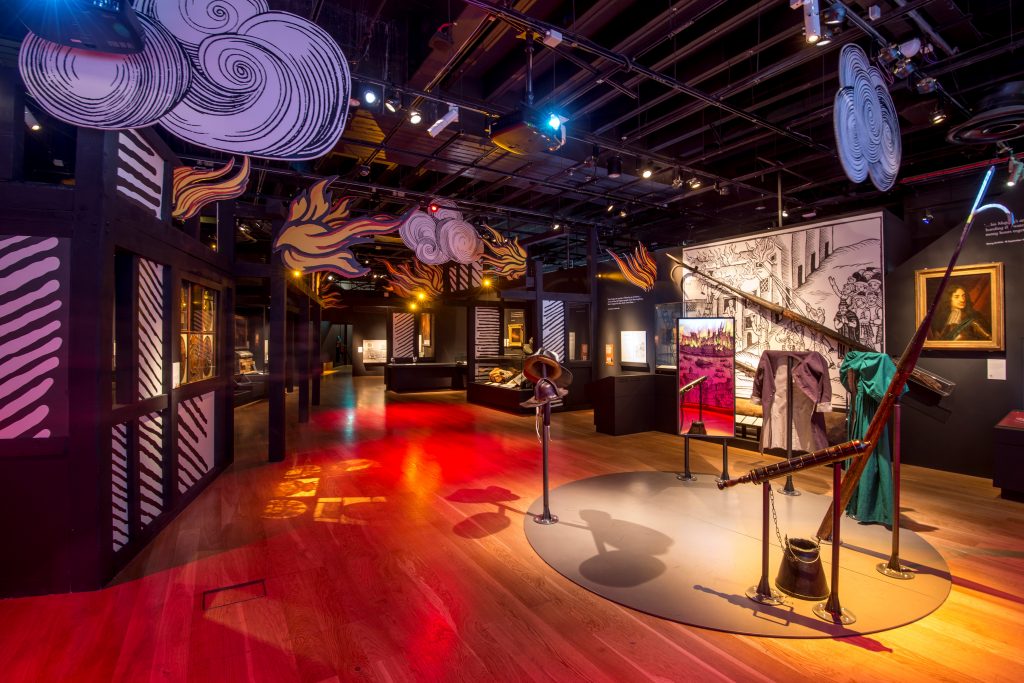 There’s a wonderful section with Pudding Lane archaeology. There are fire damaged bricks you can touch with hand-held magnifying glasses for closer inspection, plus microscopes too.

You can also see stone from the medieval St Paul’s Cathedral. 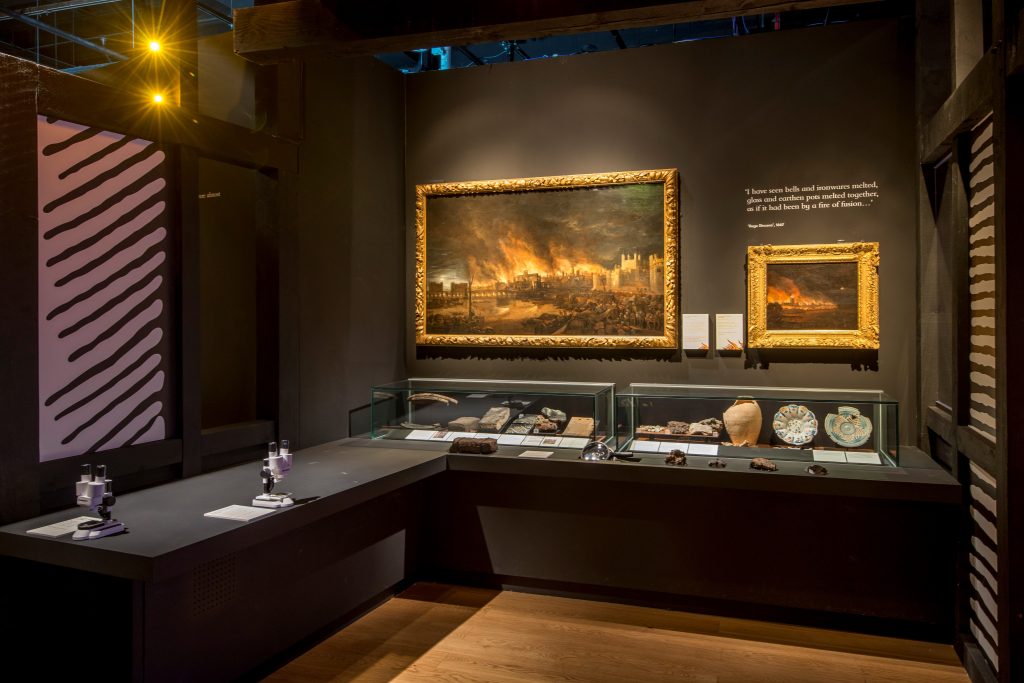 When looking at what people saved, it is well documented that Samuel Pepys buried his cheese and there’s a 1666 portrait of him so we know what he looked like at the time.

Then there’s fire fighting equipment from the time (I was surprised how big the fire hook was but it did need to put down buildings). And an interactive touchscreen game where you can try and stop the fire from spreading. 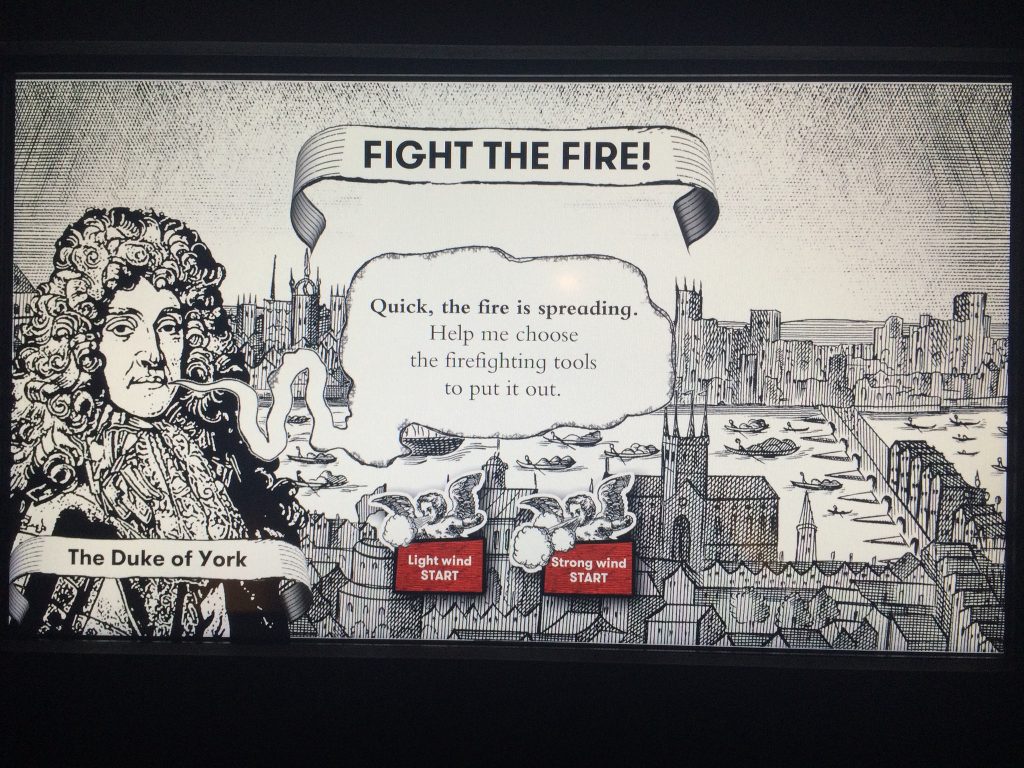 As this exhibition will be popular with school children and families there is some dressing up on offer but there’s no uniform as there wasn’t a fire brigade at the time. 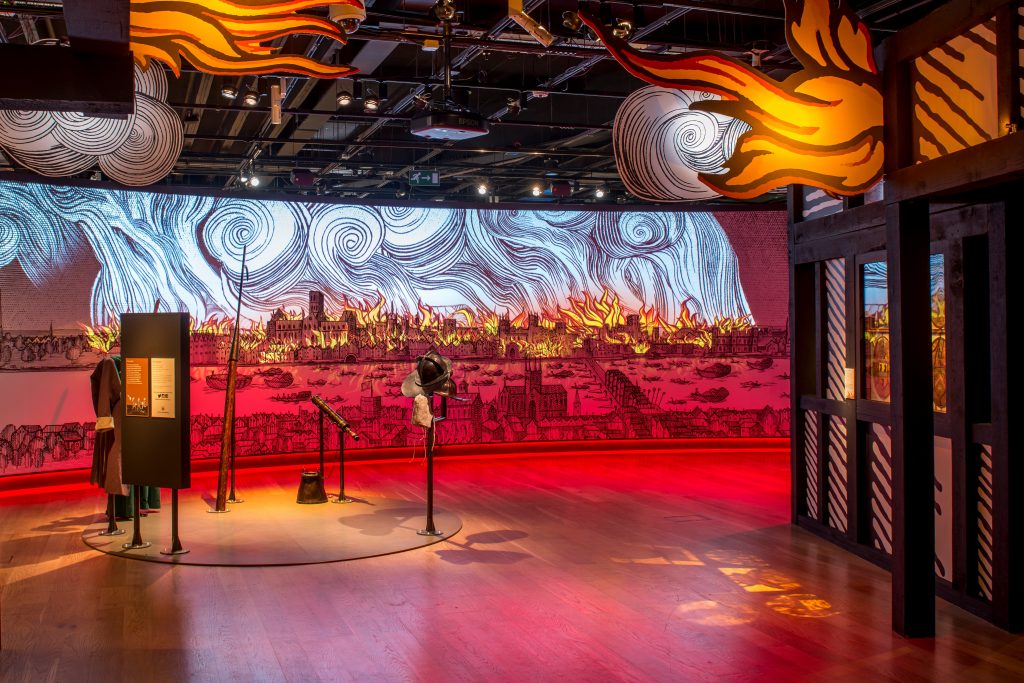 Form here you can move through to the last section of the exhibition which is about the aftermath. It’s been kept grey and quite open, and there’s a representation of the temporary shelters for the homeless. Here you can hear voices reading extracts from 17th century accounts of people made homeless by the Great Fire as 13,000 houses were destroyed.

There’s also a fire engine that was on display in the Museum as just a large barrel but coach builders have restored it. 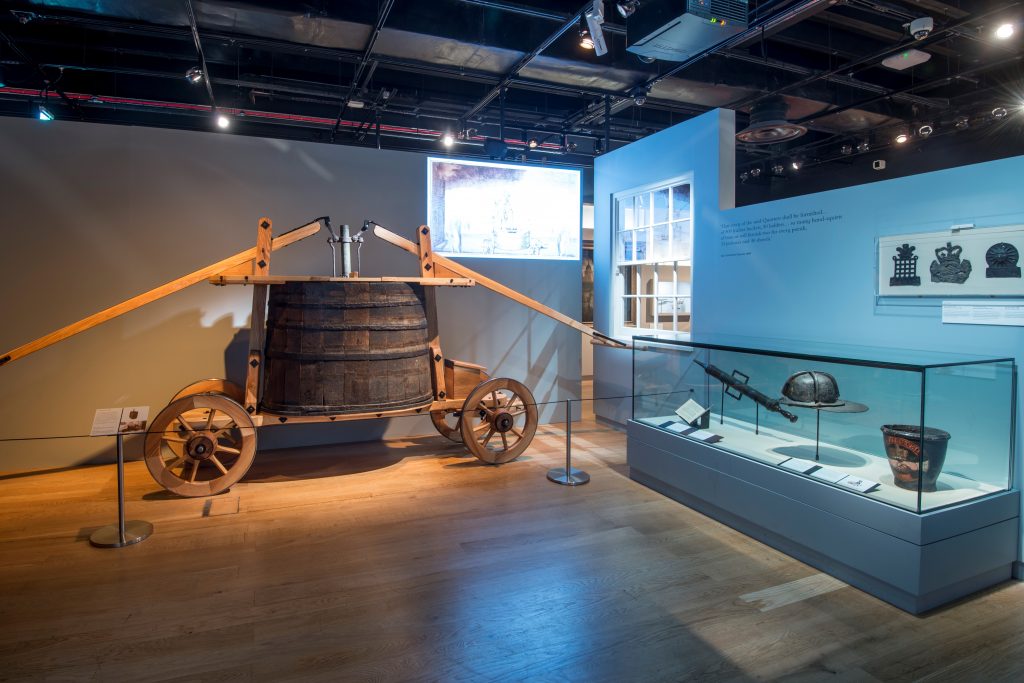 And do have a look at the display of ironmonger’s stock (mostly padlocks and keys) that were burnt in the Great Fire alongside x-rays of to show what’s hidden in the melted mess.

The final section is about the rebuilding of the City which took about 40 years. You can try some town planning of your own with wooden building blocks and see some of Sir Christopher Wren’s original drawings.

Tickets: From £8 for adults and £5 for children

The latest Step Outside Guide book includes a visit to the Museum of London, See my review of London’s Splendid Square Mile.

Also have a look at the New Design for the Museum of London for its West Smithfield move.