You are here: Home / London / London Attractions / Meet Henry VIII at the Museum of the Order of St John

Throughout summer 2019 you can travel back in time to 1541 to survey St John’s Gate in Clerkenwell with Henry VIII. I joined a royal tour as he appraised the latest monastic addition to his property portfolio during the final stages of his Reformation. 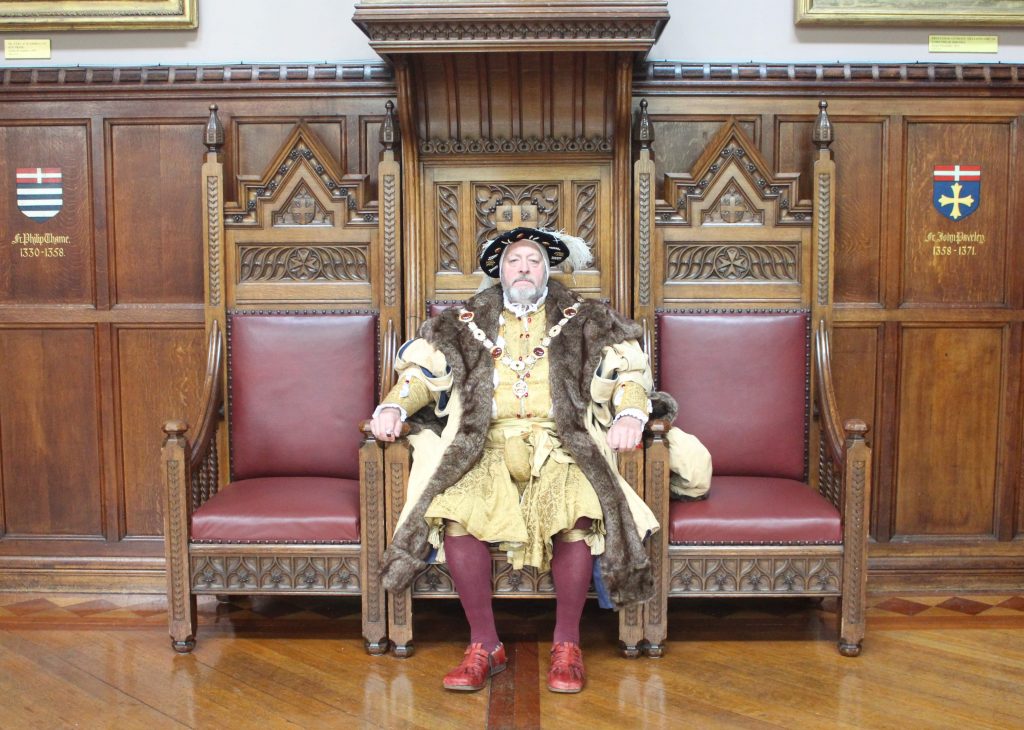 What is the Order of St John?

Today, the Order of St John is an Order of Chivalry of the British Crown. It is a leading international humanitarian charity with around 400,000 volunteers and staff in 40 countries. In England, the Order’s main role is to support its well-known subsidiary, St John’s Ambulance, in its first aid and caring mission.

The Order first came into being almost 1000 years ago in 1080 when a hospital was established in Jerusalem by Benedictine monks to provide care for pilgrims of all faiths making the long journey to the Holy City. It combined the roles of hospice and hotel. The men and women who worked there were members of a new religious order, officially recognised by the Church in 1113. Known as the Hospitallers, they cared for anyone, without distinction of race or faith.

After the Crusaders captured Jerusalem, the Hospitallers also took on a military role becoming known as the Knights of the Order of St John of Jerusalem.

When Palestine was recaptured by Muslim forces in 1291, the Order moved briefly to Cyprus and then, in 1309, to Rhodes where they remained until 1522, when the Turkish Sultan, Suleiman the Magnificent, conquered the island. From Rhodes, the Order moved to Malta. After a famous siege by Suleiman in 1565, which the Knights and the Maltese people survived, a new capital city, Valletta, was built. The Order’s ships patrolled the Mediterranean and remained on Malta until 1798 when the island was surrendered to Napoleon.

Wherever they went, the Order maintained the Hospitallers original mission to build hospitals.

In the 1140s the Priory of Clerkenwell was set up as the English headquarters of the Order of St John. As one of Europe’s wealthiest ecclesiastical Orders, the Priory buildings often underwent modifications and improvements. A new southern grand ceremonial entrance, St John’s Gate, was built in 1504 by Prior Thomas Docwra who was a trusted advisor to Henry VIII. The Grade I listed building consists of an arch over the street with a room over it, flanked by slightly higher tower-like wings differently arranged on the north and south sides. 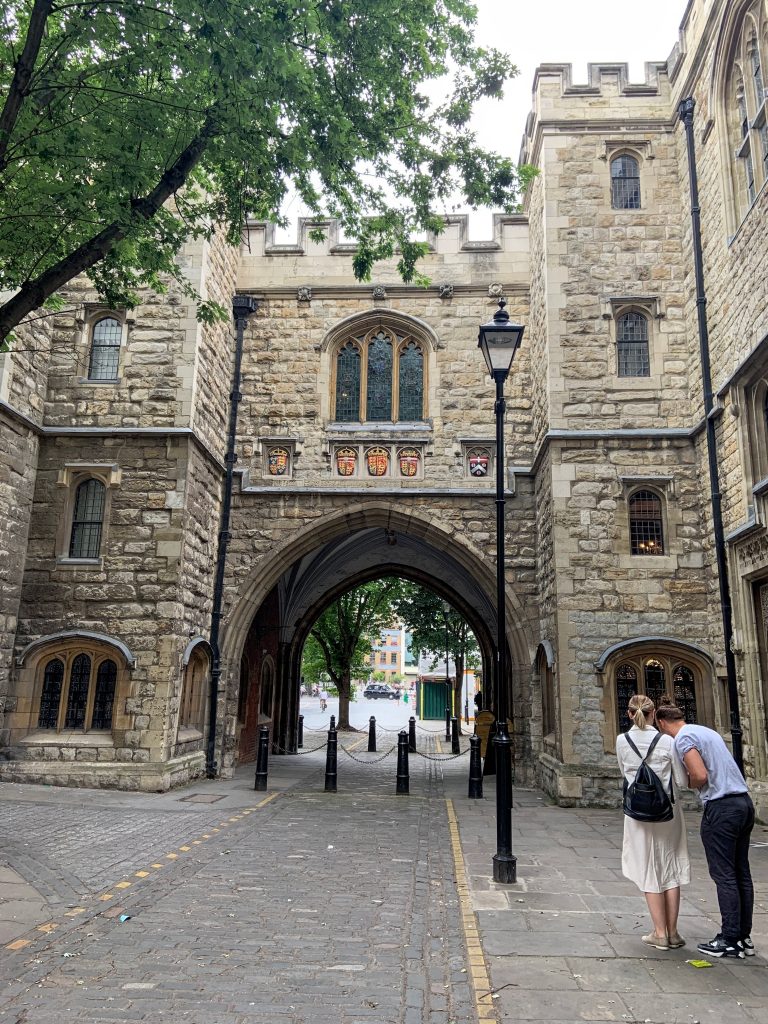 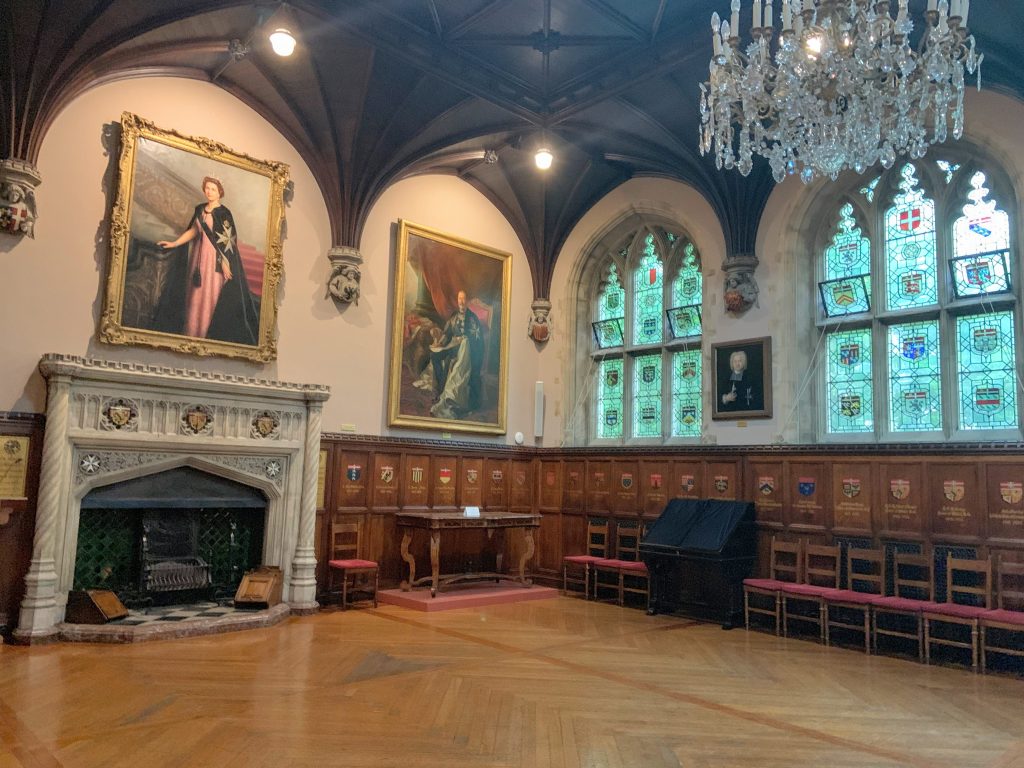 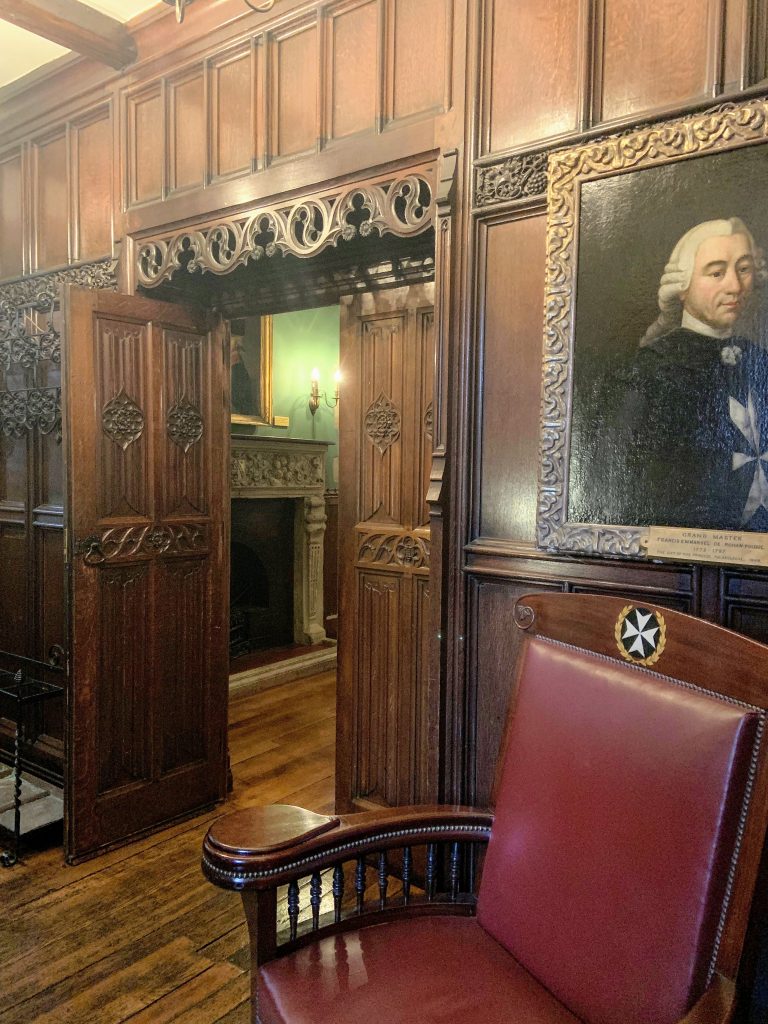 Henry VIII needed a male heir so wanted a divorce from Catherine of Aragon. As head of the Catholic Church, he asked the Pope but was refused. As well as the moral and religious grounds, the Pope was afraid of King Charles V of Spain who was the nephew of Catherine of Aragon. Charles V supported the Order of St John as he gave Malta to the Hospitallers, and the previous Pope had been a Hospitaller.

As we all know, Henry didn’t get his own way so he started his own religion and became head of the Church of England in 1534. He demanded religious houses throughout England and Wales were closed. The buildings, lands and wealth of religious communities, like the Order of St John, were transferred to the crown and in 1540, Henry took over the Order of St John’s property, including the Priory of Clerkenwell.

The King authorised the destruction of the Order’s Priory Church and all useful construction materials were removed and reused elsewhere. Much of the stone from the Church’s former steeple can now be seen in the basement of Somerset House.

In the basement of the Zetter Townhouse, you can see the original wall of the priory, and there is a circle on the ground in St John’s Square marking the size of the round nave. It was a substantial building on a comparative scale with the Old St Paul’s Cathedral.

The Order was restored briefly by Henry’s Catholic daughter, Queen Mary, who granted it a Royal Charter and briefly used the building as a palace. However, on the accession of her Protestant sister, Queen Elizabeth I, the Order in England was dissolved for good.

The buildings in Clerkenwell were put to different uses in the years that followed. From 1578 to 1607, they were used to house the offices of the Master of Revels, one of the most influential posts in Elizabethan England. Responsible for theatrical censorship, thirty of Shakespeare’s plays were licensed here.

Dr Samuel Johnson was given his first job in London at St John’s Gate, writing reports for The Gentlemen’s Magazine which was printed here monthly.

Later in the 18th century, aristocratic families leased the buildings as they were a good location on higher ground, near the City and a freshwater source.

At the end of the 18th century, the Gate was used as a pub, The Old Jerusalem Tavern, where artists and writers, including Charles Dickens, used to meet. There is still a connection with the nearby Jerusalem Tavern as the Museum holds regular pub quizzes.

St John’s Gate was heavily restored in the 19th century, and the modern Order of St John in England was granted a Royal Charter by Queen Victoria in 1888. Queen Elizabeth II is still the Sovereign Head of the Order.

Humanitarian in its aims and purpose, the modern Order recognised the need for public first aid and ambulance transport services and established an eye hospital in Jerusalem. 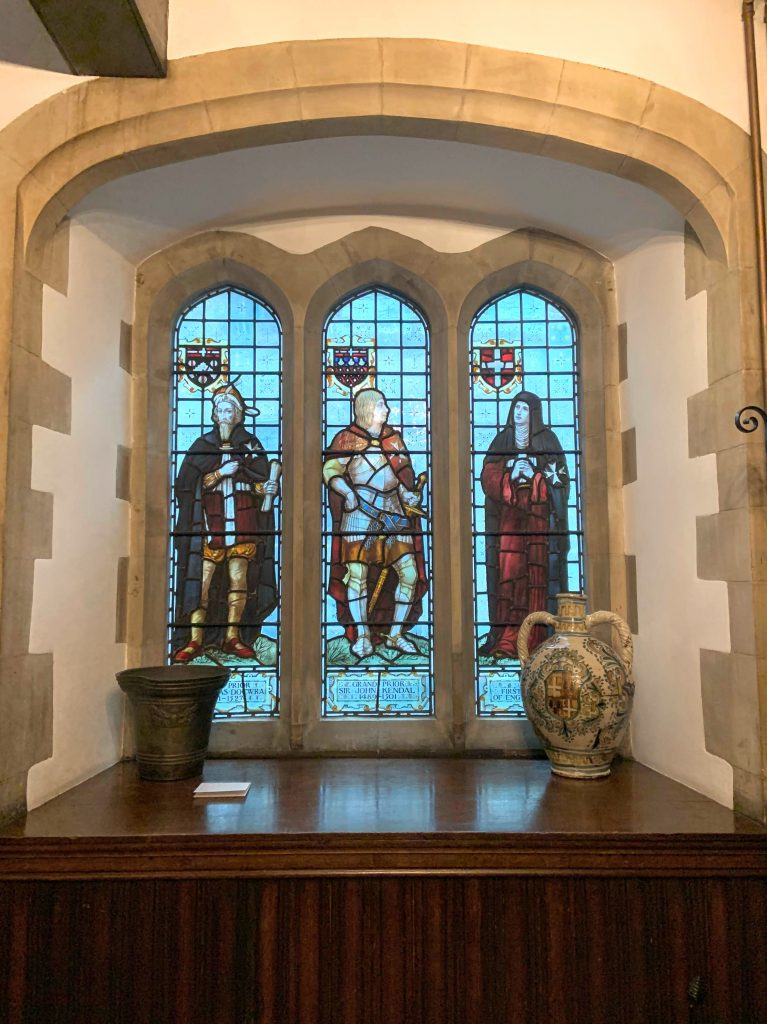 The Museum of the Order of St John tells the story of the Order from its origins in 11th century Jerusalem, through to its role today with St John Ambulance and the St John Eye Hospital in Jerusalem. From historic arms and ancient coins to fine art, first aid supplies and medical equipment, the collection spans over 900 years of history.

The Museum occupies two sites in Clerkenwell, St John’s Gate which dates from 1504, and the Priory Church of St John with its surviving 12th-century Crypt.

The museum was renovated in 2010. While it still appears to be a modern museum it could do with an explanatory timeline as there is a lot of history to cover. The current collection explores history, art, religion, culture and medicine. 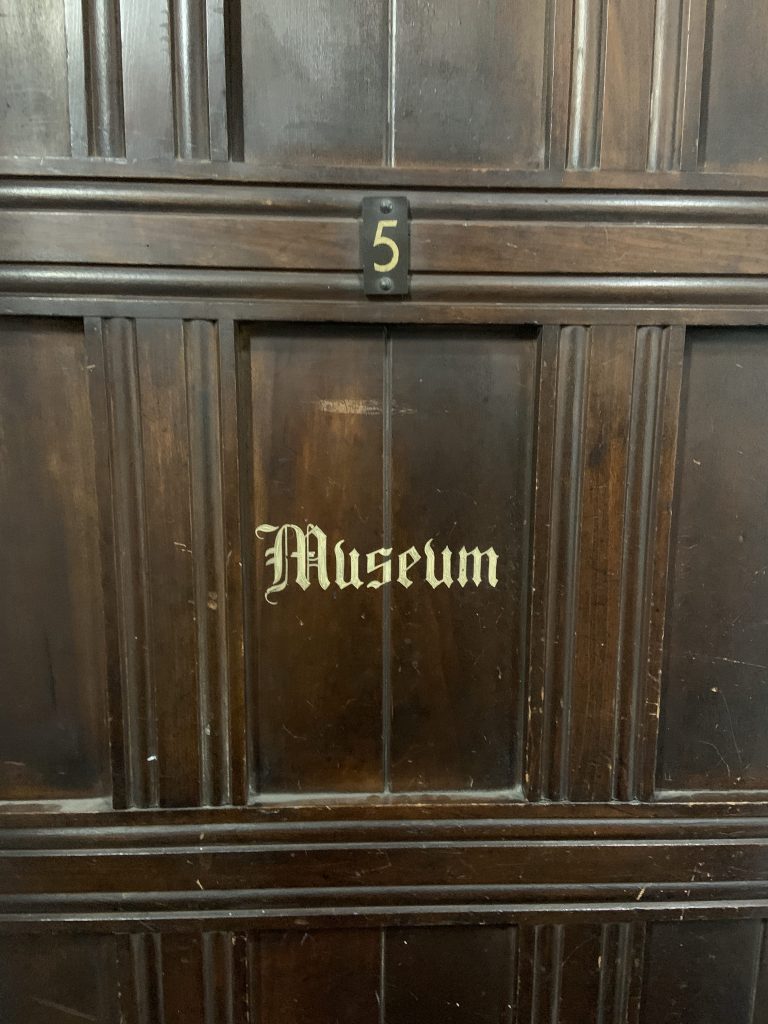 I’ve given you lots of information before these details as I felt the tour had a lot of assumed knowledge. But do your reading in advance and you’ll enjoy hearing a first-hand account of life in the 1500s from the infamous King.

He is very happy to pose for modern portraits (selfies) at the end of the tour.

By joining the tour, you get to see a lot more of the buildings which have a fascinating history transforming from a Norman priory into a Georgian coffee house. 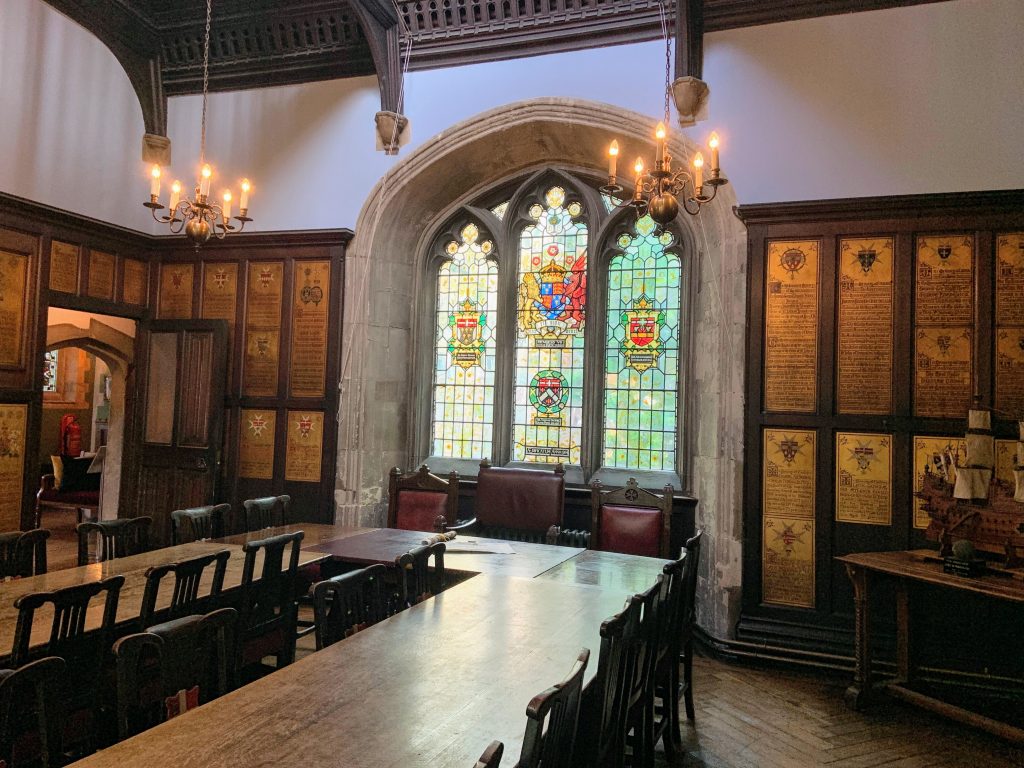 The Museum has an expanding events programme with tours, cinema screenings and an escape room game being planned. 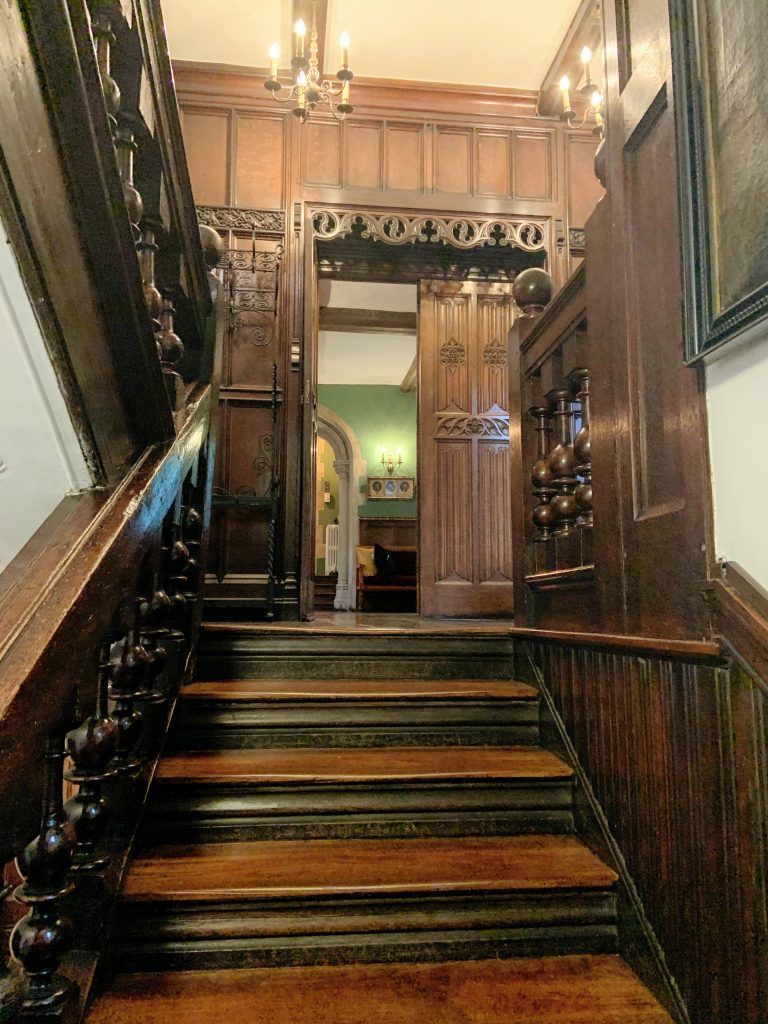 The Museum tells the unique and fascinating story of an ancient religious military Order, from its origins caring for sick pilgrims in 11th century Jerusalem, through to its modern-day role with St John Ambulance, the international first aid charity.

Opening times: 10am to 5pm Monday to Saturday (and Sundays in the Summer)