You are here: Home / London / The Royal Mews

The Royal Mews is part of Buckingham Palace. Since the 19th century it has been where historic coaches and carriages are kept as well as the palace stables.

The Royal Mews is responsible for all road travel arrangements for The Queen and members of the Royal Family so it is not just fancy horse-drawn carriages but also cars too.

And it’s somewhere we can visit. 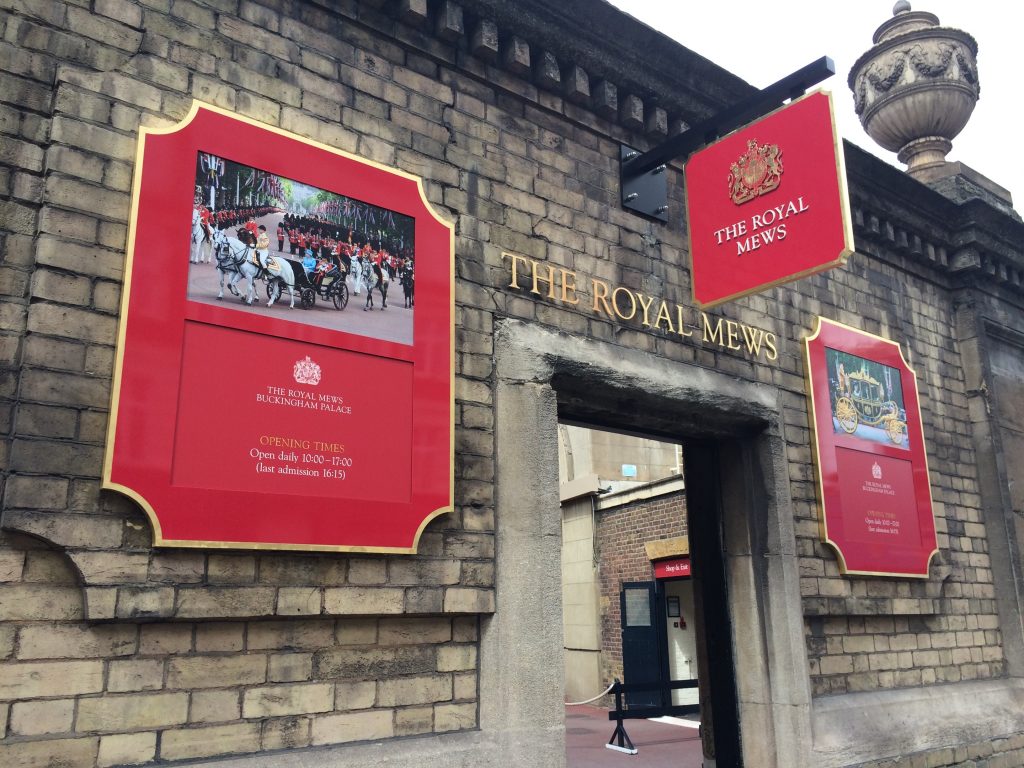 The entrance to the Royal Mews is on Buckingham Palace Road opposite the Rubens at the Palace hotel.

Once you’ve purchased your ticket, you need to go through security checks (bag x-rays and airport-style person checks and then you are free to explore.

There are guided tours and multimedia tours included in yout ticket price. 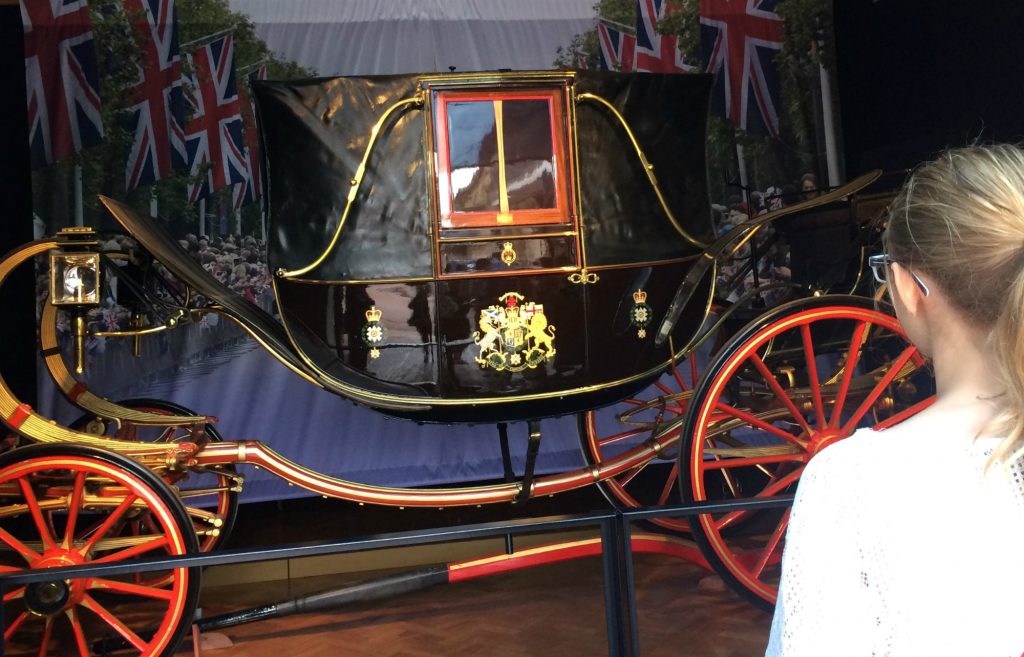 All of the 40 carriages and cars are in use by the royal family. (State cars are maroon and black. There are three Rolls Royces, three Daimlers and two Bentleys.)

The photo above is of the Semi-State Landau and it’s convertible. I’ll be honest, I thought it looked like somewhat like a large Silver Cross pram! The footman sits at the back and is needed to open the doors as not all coaches have door handles on the inside.

Do notice the lion and unicorn on the door. Here’s a close-up from another coach. 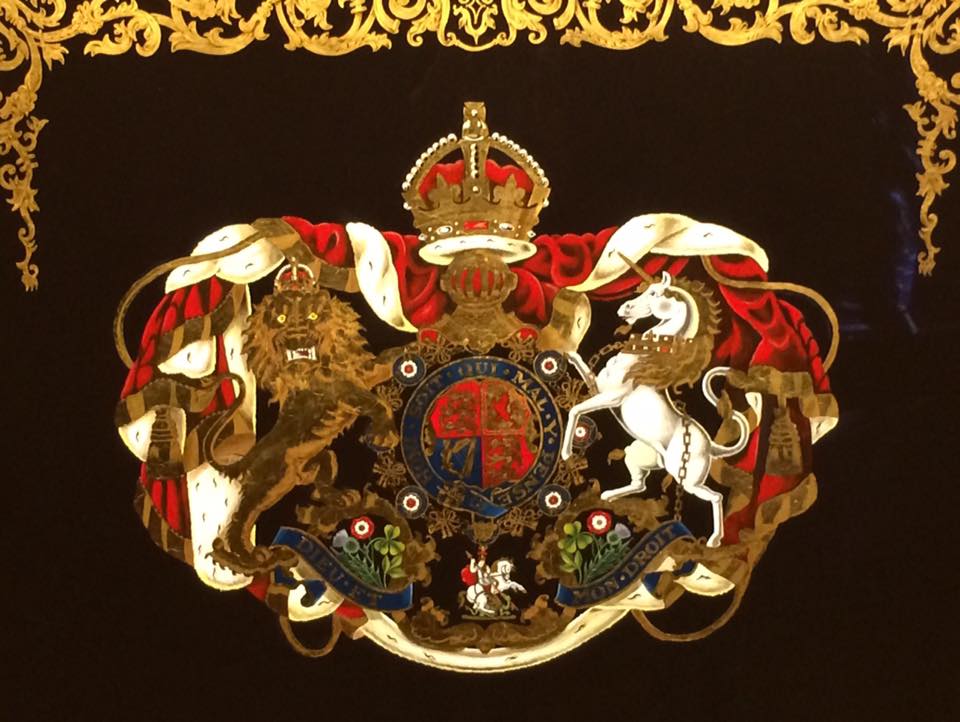 This one is so special you need to go inside the Diamond Jubilee State Coach House to see it. It weighs over three tonnes and needs six horses to pull it. 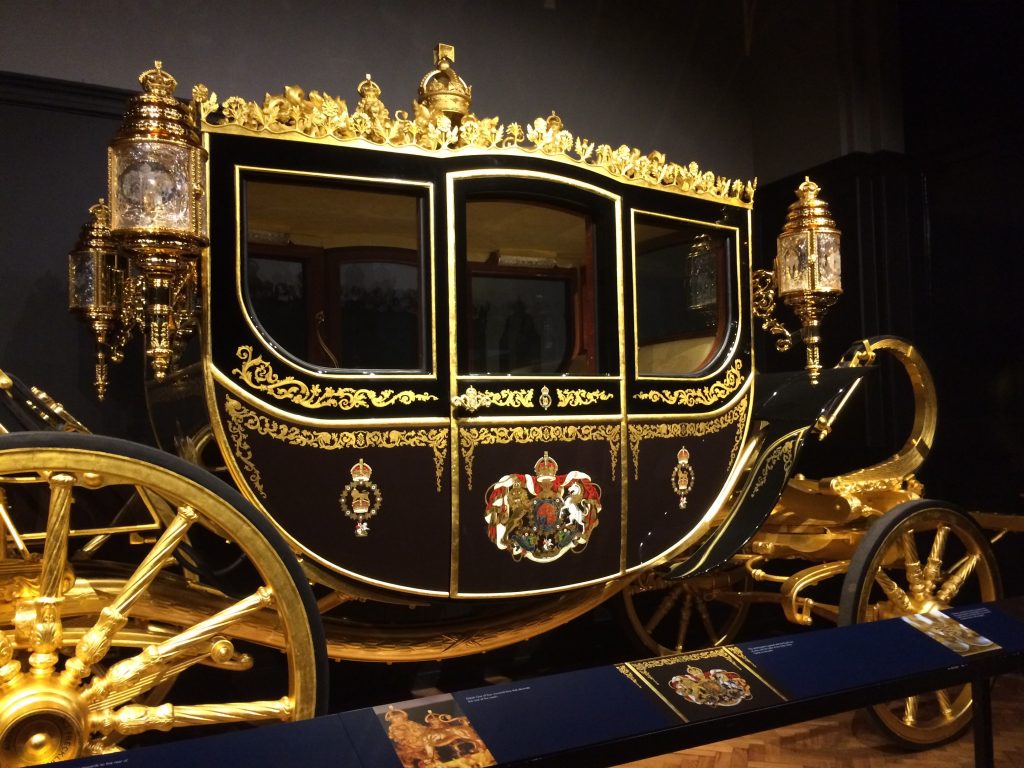 This was first used to convey The Queen to the State Opening of Parliament in 2014. It has electric windows and air conditioning.

Incredibly, the coach contains more than a hundred artefacts from across one thousand years of British history. The seat handrails are from Royal Yacht Britannia, and sections of the window frames are from Caernarfon Castle, Canterbury Cathedral, Durham Cathedral, Henry VIII’s flagship The Mary Rose and more.

There are pieces of wood from famous landmarks including St Paul’s Cathedral and the Tower of London. And there’s even a piece of Florence Nightingale’s dress.

Wood from Nelson’s flagship HMS Victory was used for the crown on top of the carriage and it also has a camera fitted so we can see recordings from ‘crown cam’.

The most dazzling, and most well known, of all coaches is the Gold State Coach. It has been used at every coronation since that of George IV in 1821, including The Queen’s on 2 June 1953. 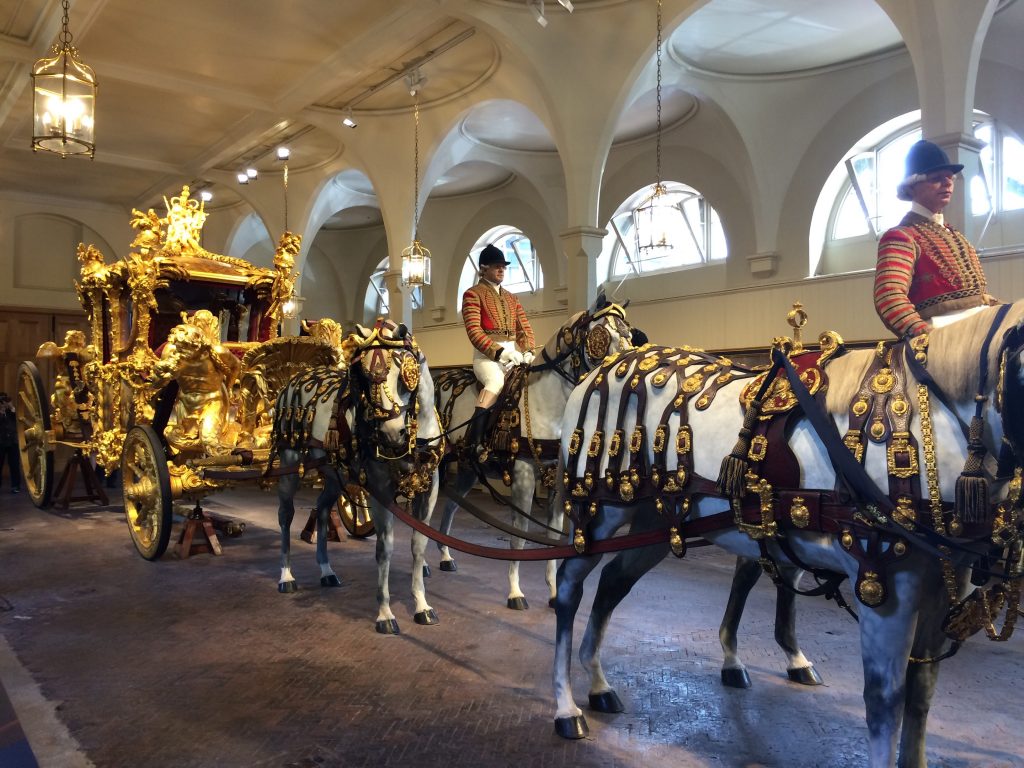 Dating from the 1760s, the Gold State Coach is the oldest, and also the heaviest, of the carriages at the Royal Mews. It needs eight horses to pull it and it weighs four tonnes (that’s the same as an elephant). It’s also not a comfortable ride as Queen Victoria said it had “distressing oscillations”.

As the carriage is wider than the doors of the room where it is kept, do look for the hidden section of wall that has to be removed to bring the carriage in and out. Apparently, it takes 30 people 2 days to turn and move it!

The horses stabled at the Royal Mews are Windsor Greys and Cleveland Bays, breeds chosen for their steady temperament and stamina. The horses are not always on show as they may be on duty, training or away from London. (The horses go on holiday in the summer while the Queen is away  for 11-12 weeks.) 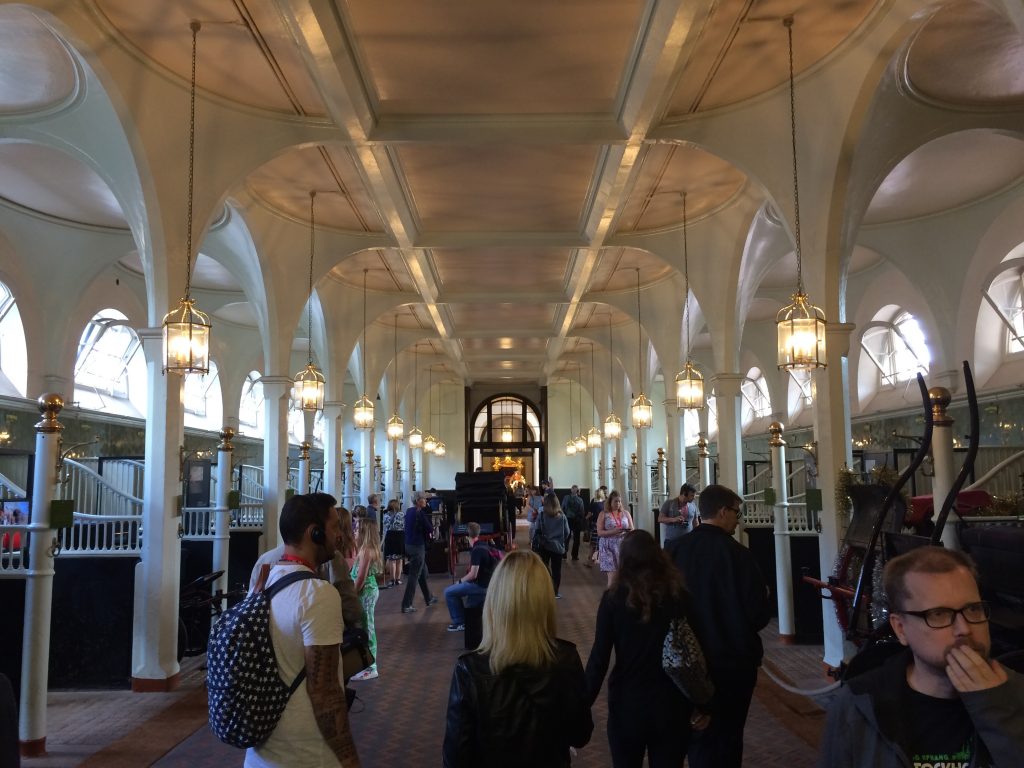 There are nameplates (with year of birth) for each horse, plus some special carriages. When you see the tinsel that’s for Santa’s sleigh! He brings presents for the children who live at the Royal Mews (with family members who work here). Santa is the only other person, apart from the Queen, who can use the Windsor Greys. 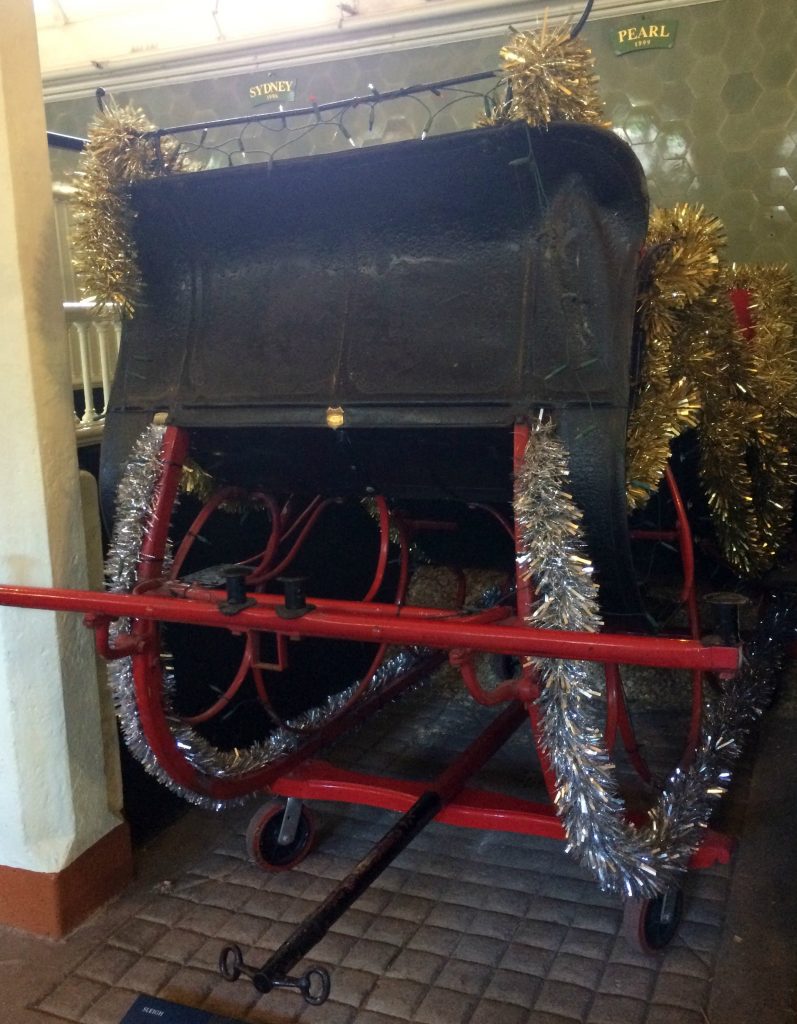 There have been some additions in the State Stables to help engage a family audience. You can sit in style in the replica landau inspired by the Semi-State Landau, thought to be Queen Victoria’s favourite carriage on ceremonial occasions. 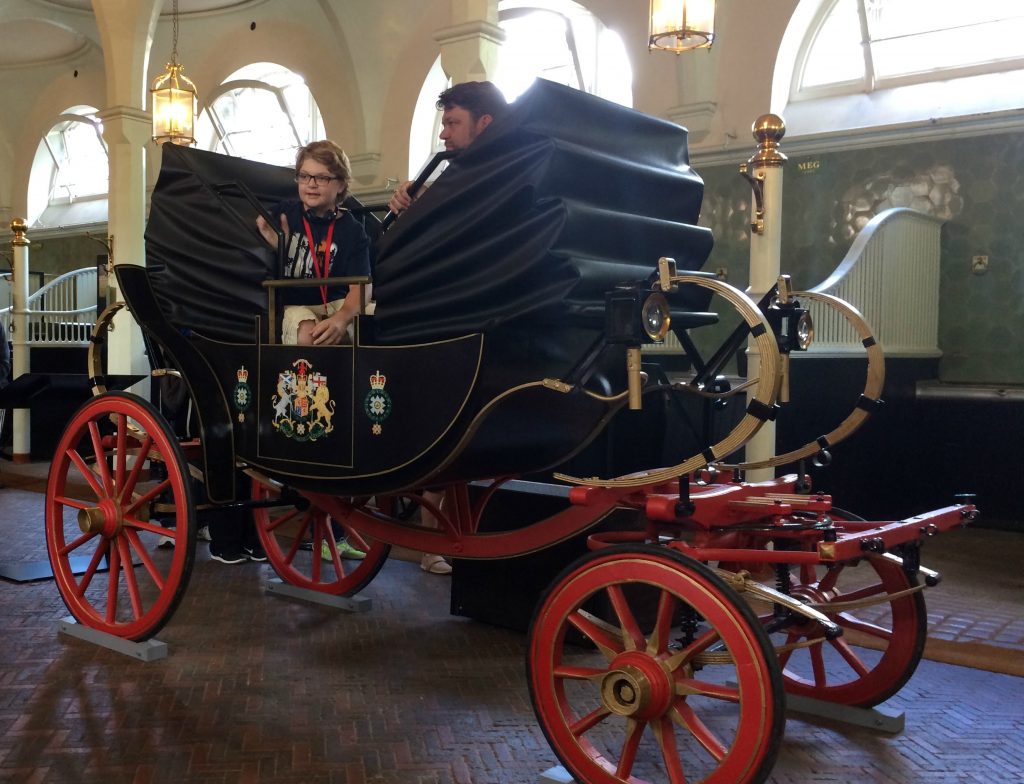 You can also learn how to harness a horse (on a wooden horse) and dress up as a footman. And it wasn’t just children I saw enjoying these activities.

In addition to the historic vehicles on display, visitors can see the daily work of the Royal Mews staff, from feeding, exercising, mucking out and training of the horses, to the work in the harness room too. 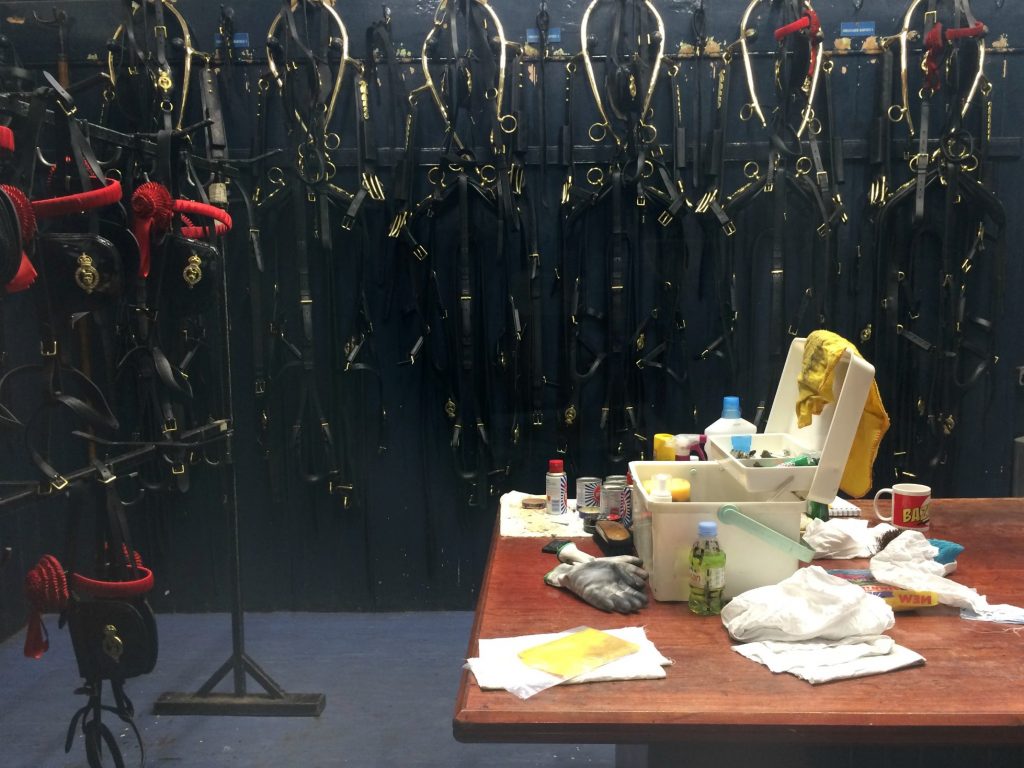 You can explore independently but I will say the tour guides are experts. I really enjoyed the family guided tour which is more interactive (lots of questions) but has all the same interesting information. (The family guided tour is at 1.30pm on Fridays, Saturdays and Sundays, plus usually every day in the holidays).

I found out there are at least two carriage restorers working here full-time. And that when travelling by car, the Queen likes to have a blanket and the Duke of Edinburgh likes to have a street atlas (A-Z map).

You can also try the family multimedia guide as it includes games, videos, facts and stories. You get to follow a young resident at the Royal Mews and learn what goes on behind the scenes. 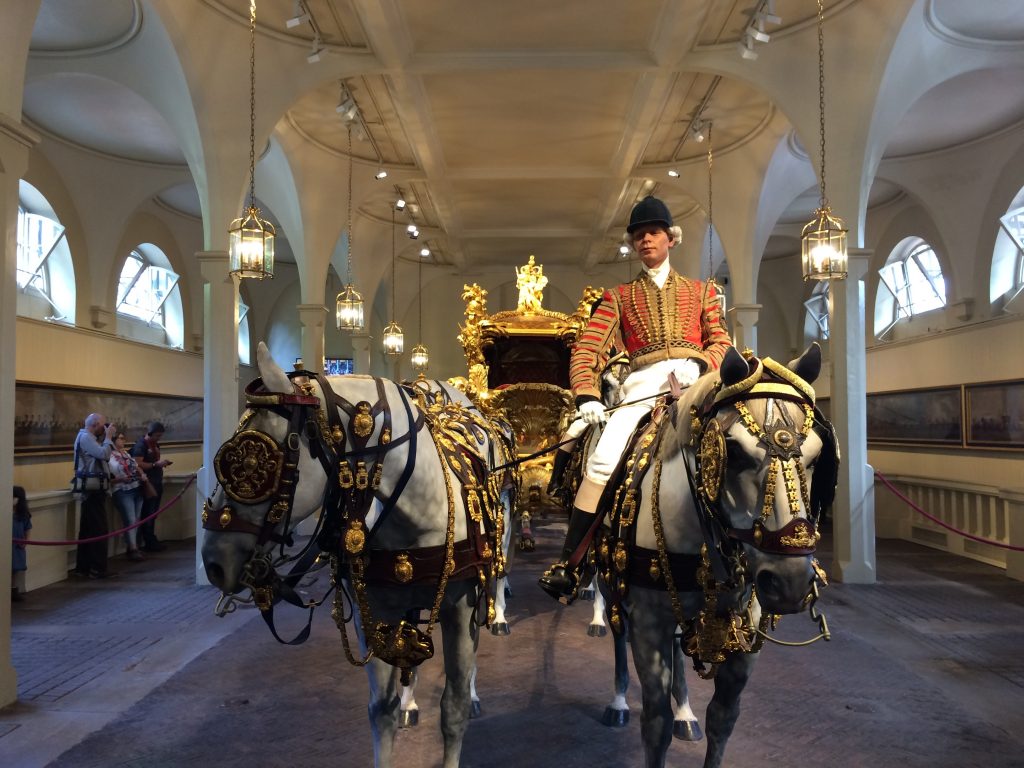 As you leave you’ll pass The Riding School. Do notice the speakers on the walls which are used to help the horses and riders get used to the noise of crowds. They also do a lot of flag waving here so the horses get used to that before going out on duty.

And while visiting, and outside, do look out for the messenger Brougham carriage that sets out daily from the Mews to transfer post between royal residences, a task that has taken place since 1843.

Not everyone realises this but your ticket becomes an annual pass if you get it stamped at the end of your visit so you can return again and again.

There’s also a ‘Royal Day Out’ ticket option which gives combined entrance to the Royal Mews, The State Rooms at Buckingham Palace and The Queen’s Gallery.

The Royal Mews is open from February to November each year with longer hours from April to October.

A typical visit lasts one hour.