You are here: Home / Outside London / Where are The Chilterns?

Before visiting, I asked lots of people if they knew where The Chilterns are. Many had heard of the area but had no idea where it might be. Some thought it might be in the Peak District as they knew it had something to do with hills but beyond these erroneous guesses most didn’t have a clue.

It seemed the only people who could give a better answer either lived in the area, close to it or had previously lived there. So that tells us that The Chilterns is known locally but possibly not beyond.

The Chilterns Area of Outstanding Natural Beauty is one of the 46 AONBs in England, Wales and Northern Ireland. AONBs belong to the same family as National Parks.

The Chilterns was designated an AONB over 50 years ago in 1965 to recognise that the Chiltern Hills contain some of the finest landscapes in the country which are worthy of protection at the highest level.

The area covers around 324 square miles of countryside, and The Chilterns go across four English counties: Oxfordshire, Buckinghamshire, Bedfordshire and Hertfordshire.

A quick answer to ‘Where are The Chilterns?’ is to simply say it’s between London and Oxford. That gives you the idea it’s to the west and north-west of London.

It’s actually so close to London near the middle that London Underground’s Metropolitan Line reaches into The Chilterns at Amersham and Chesham. This part of Buckinghamshire is in The Chiltern District Council, one of four local government districts in Buckinghamshire.

Other areas of The Chilterns can be reached by train from London in around an hour or less. 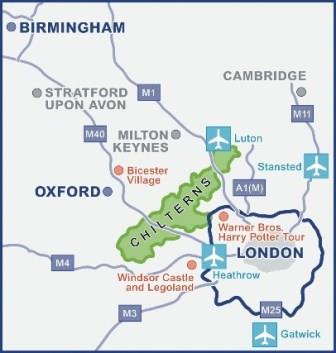 Why Visit The Chilterns

Why should you visit the quintessential, green English countryside of The Chilterns with its impressive selection of pubs and restaurants? That question may well have all the answers you need.

Being so close to London makes The Chilterns an ideal ‘weekend escape to the country’. Do see my review of the Danesfield House Hotel afternoon Tea. And I took a tour and stayed at the Chiltern Valley Winery and Brewery. And let me explain why Henley-on-Thames is much more than ‘that posh place with the Royal Regatta’.

Walkers enjoy The Ridgeway, that starts in the North Wessex Downs AONB and ends in The Chilterns at Ivinghoe Beacon – a popular viewpoint. And the Thames Path National Trail starts in The Cotswolds AONB and cuts across the southern edge of The Chilterns, following The Thames river to Greenwich in London.

The Chiltern Heritage Trail has been revived by the Chiltern Society. The 50 mile circular trail has a cycle route and there are eight sections for half-day walking routes too.

The Chilterns AONB has stunning beech and bluebell woods. And 2000km of well-signposted footpaths and bridleways make it easy to explore every part of this beautiful area on foot, by bicycle or on horseback. 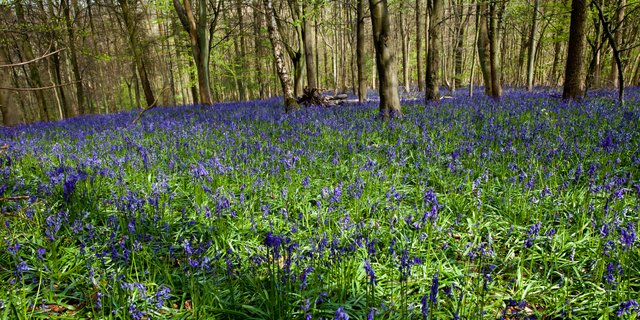 Chalk streams are an attractive feature of the Chilterns and are an important habitat for wildlife. Globally chalk streams are rare with only 200 or so in the world yet there are over 160 of these streams are to be found in England.

The use of local materials in older buildings give Chilterns villages a distinctive, and picturesque, character. Bricks and tiles were produced from clay dug out of the fields and woods. Flint was quarried from the chalk of the hills and the overlying clay.

Not the toys on strings but the birds of prey can be seen, and heard, in The Chilterns.

The birds were persecuted to extinction in England by the end of the 19th century. Between 1989 and 1994 the RSPB imported and released red kites from northern Spain into the Chilterns and now they are widespread again in the area.

The kites started breeding in the Chilterns in 1992. Chicks have been taken from the Chilterns to reintroduction sites in other parts of the country.

You may have heard of the Chiltern Hundreds but it’s now more of an archaic reference.

A hundred was an administrative division that was geographically part of a larger region. The Chiltern Hundreds was an ancient administrative area in Buckinghamshire composed of three ‘hundreds’ and lying partially within the Chiltern Hills.

“Taking the Chiltern Hundreds” now refers to the legal procedure used to effect resignation from the British House of Commons. This is because, in the 18th century, the ancient office of Crown Steward for the area became the first to be used in this resignation procedure.

Find out More About The Chilterns

To find out more about The Chilterns – including what’s on, where to stay, etc – have a look at: www.visitchilterns.co.uk.