Since visiting the WW2 Bunker in North London I’ve been wanting to go back to the Cabinet War Rooms in central London but I kept finding a queue outside like this:

But, eventually, I found a time with a slightly shorter queue so I could revisit and see if this is still a “must see” attraction.

Upon arrival, there are bag security checks and then you move downstairs to the Ticket Desk. An audio guide is included in the price.

Literally the first room you see is the War Cabinet Room and everyone stops to listen to their audio so the way into the room is blocked from the moment you arrive. Welcoming, eh? A member of staff here would be useful to encourage people to move further into the room but I didn’t see a member of staff at all during my visit. It would have been helpful again later when my audio guide broke – I was standing still with it hanging round my neck and it just fell off and I couldn’t reattach it so had to carry it for another hour.

So, this sets the scene for the visit. You’ll be moving through in ‘clumps’ with many people just in front of you so you can’t see much.

It’s a very dark attraction and although photography is allowed you may find it’s too dark to get many memory pics. And there are those ‘freaky waxworks’ that dated attractions adore so much.

I guess the real reason visitors want to see this place is because it has been preserved as it was found so it hasn’t changed. But, that doesn’t mean the visitor experience can’t be updated.

The last attempt to improve was in 2005 when the Churchill Museum opened. It’s a large room within the attraction but, oddly, it’s even darker than the rest which makes the sharp corners of cabinets quite a hazard. I picked up a map at the entrance but it was too dark inside to be able to see it!

Apparently, the Churchill Museum divides his life into five eras. There’s no one path to follow so I’m sure I missed loads as I saw nothing in any order. Audio has been added here and I suddenly heard lots of cheers but still have no clue what that was all about. There were also multiple videos but there were four in the same area all running at the same time which was overwhelming.

I looked around for about 15 minutes and then tried to find the way out but there was no signage for an exit. And, remember, there are no members of staff anywhere to ask. So I tried the way we had entered which turned out to be right and got us straight back on the ‘audio guide/moving around in clumps/not being able to see anything’ circuit. 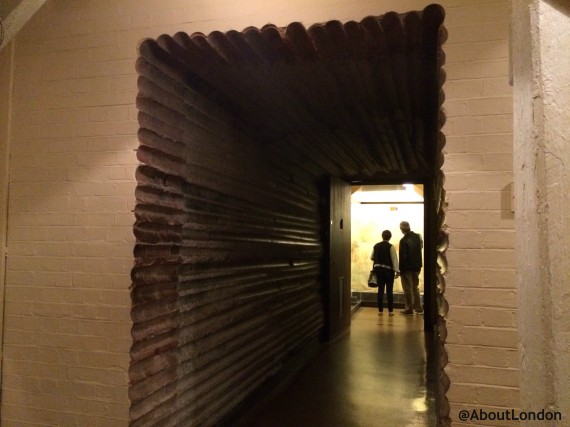 My visit lasted for 1.5 hours and that was enough. Being underground with such low lighting actually makes you feel very tired. 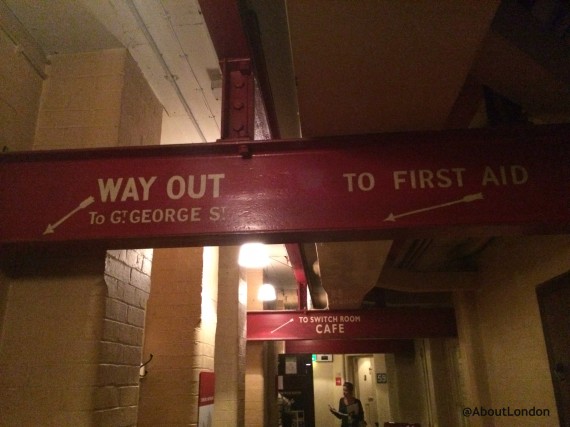 Even when it was time to leave there was no-one I could tell about the broken audio guide and overall I felt disappointed. Being ‘the real thing’ is not enough when you’re a visitor attraction. The audio guide was so dry it only added to the tiredness and it’s really not appealing to children (note, kids no longer go free). I noticed there was a school visit planned (a table had a cloth covering exhibits ready for the kids) and I wondered how they would make this more interesting for them. Education about wartime is important but that doesn’t mean you can only learn through seeing room-sets or boring guides.

I don’t expect the Churchill War Rooms to be a laugh a minute or full of interactives but it does need to be more visitor-friendly. I remember the cafe was actually quite nice when I visited five years ago but no-one was stopping this time as, I think, they just wanted to get outside and away from it.