The Fan Bridge has been in Paddington since 2014. It’s a footbridge over the Grand Union Canal Basin and is just a few minutes walk from Paddington station. It’s one to see when you visit for the Rolling Bridge.

Here’s a timelapse video of it opening:

And here’s a timelapse video of it closing:

Why Does It Do That?

You may well be wondering why a footbridge opens up in such a dramatic and unusual way. I’ll explain the design in a moment, but the reason for the footbridge is to replace one that was there before. The Merchant Square development has transformed the area and the planning authority stipulated that they had to put in a new bridge.

But why does the bridge open, I hear you ask? Although it is so close to the end of the canal basin, the Canals and Rivers Trust had a requirement that boat access had to remain available. And while it doesn’t open to completely curl up like the rolling bridge, it does move up high enough for narrowboats to pass under.

Designed by Knight Architects and structural engineers AKT II, the bridge was commissioned following a competition. This design was chosen as a “kinetic sculpture” to provide both function and delight. The moving footbridge opens and closes like the blades of a traditional Japanese hand-held fan.

When fully closed, the bridge is safe for pedestrians and offers a three-metre wide bridge spanning 20 metres over the canal.

It is made of five fabricated steel beams which open in sequence. The first rises to an angle of 70-80 degrees; the four subsequent beams rise at lower increments. This creates a clearance space of 2.5 metres over the surface of the canal.

The handrail houses a low-energy LED downlight which illuminates the structure after dark.

This has been a popular inclusion on my London Free Things Challenge.

How Does it Work?

Safety in operation and simplicity of mechanism were both considered at all times in the development of the design. A bascule solution operated with hydraulic jacks was chosen as it is quiet, reliable and low-maintenance. Shaped counterweights assist the hydraulic mechanism and reduce the energy required to move the structure. The beams weight 6-7 tons and the counterweights are an impressive 40 ton.

How Long Does it Take?

The Fan Bridge is definitely slower than the Rolling Bridge. I’d say this one takes 2-3 minutes to go up and then the same to come down.

How Can I Find It?

Here’s a map of Paddington and the Fan Bridge can be seen on the right near Merchant Square.

When Does That Happen?

Most of the time it is simply a footbridge over the canal. The ‘visual drama’ happens at midday on Wednesday and Friday and 2 pm on Saturday. (Do note, if there are high winds, the fan bridge does not lift.) Merchant Square staff operate it so it can never accidentally lift while people are crossing. Sometimes there is an audience and sometimes there isn’t. But it doesn’t matter as they will operate the bridge whether we’re there or not.

The staff are usually really nice so do say hello and thank them. They operate the Rolling Bridge first and then walk over to the Fan Bridge so you can see them both on the same visit. 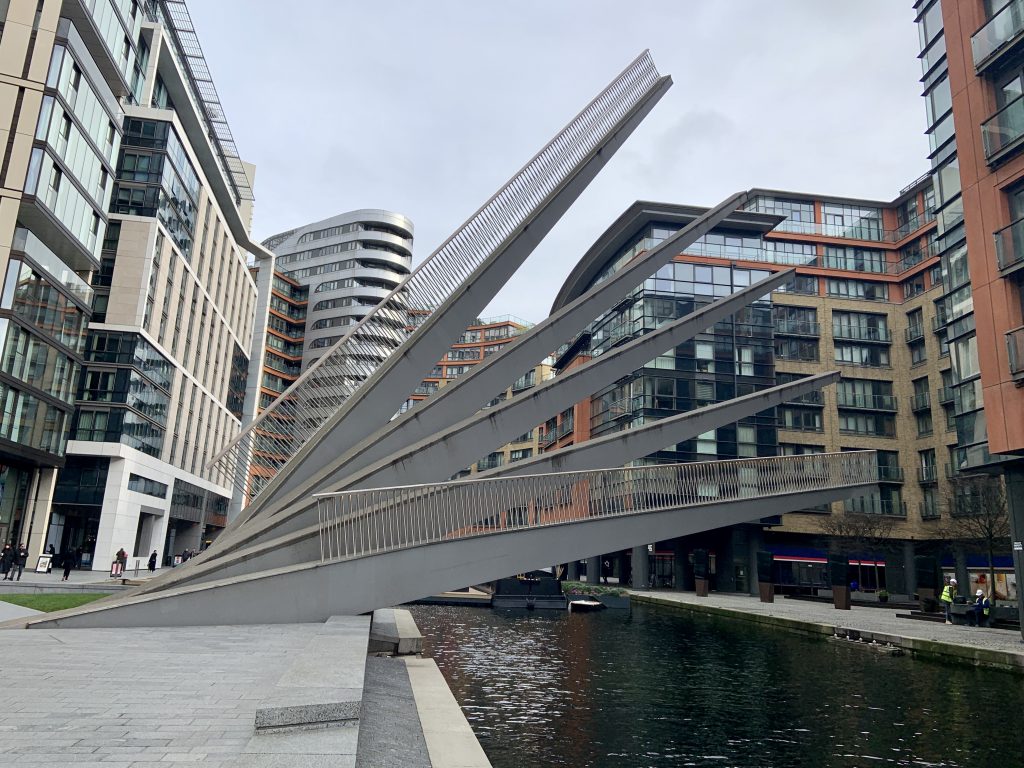