You are here: Home / London / London for Free / The Rolling Bridge at Paddington Basin

The Rolling Bridge would probably be better described as the ‘curling bridge’ as it can close in on itself to form an octagon. It can be seen at the Paddington Basin of the Grand Union Canal in west London, close to Paddington railway station.

Here’s the action speeded up.

This has been a popular inclusion on my London Free Things Challenge.

When Does That Happen?

Most of the time it is simply a bridge. It provides a foot crossing over a small inlet on the side of the canal basin so people do not have to walk around the edge of the water. Amazingly, many walk over it every day and remain oblivious to its curling abilities.

The fun happens at midday every Wednesday and Friday and 2pm every Saturday. Merchant Square staff operate it so it can never curl up while people are crossing. Sometimes there is an audience and sometimes there isn’t. But it doesn’t matter as they will operate the bridge whether we’re there or not. 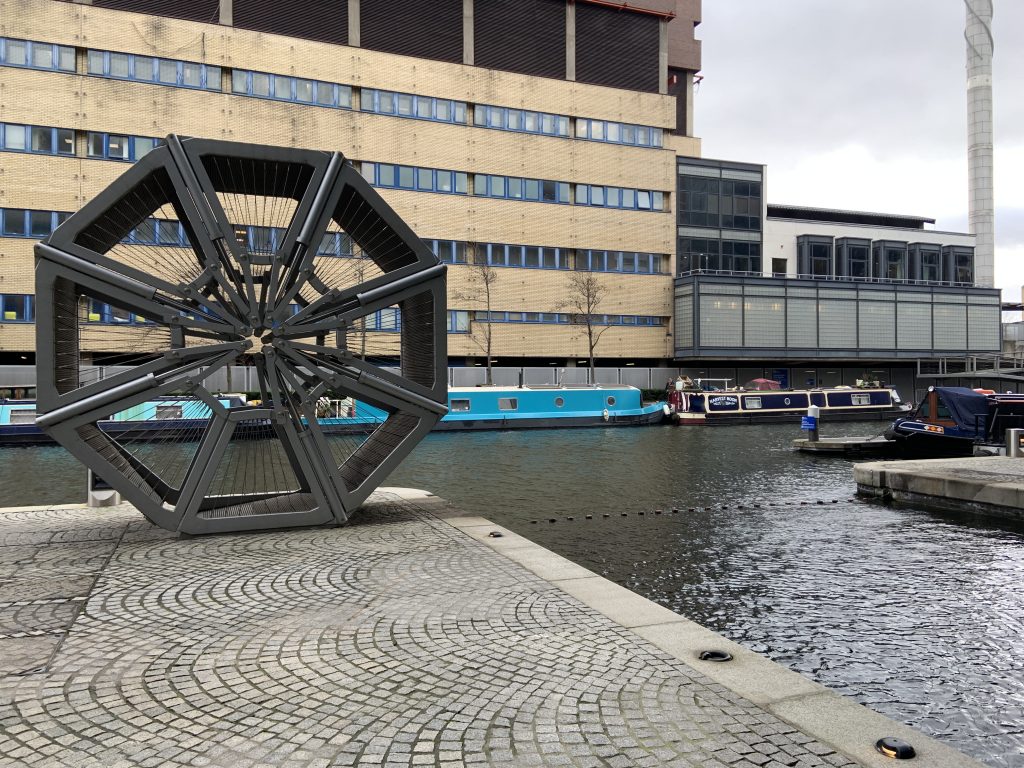 The twelve metre Rolling Bridge was designed by Heatherwick Studio. It was completed in 2004. Whereas other bridges usually break apart to allow water-level access for boats (think of Tower Bridge and the two bascules opening), the idea here was to have a bridge that closed in on itself as a whole. It couldn’t be permanent as access needed to remain for any boats that may need to moor in the inlet.

How Does it Work?

The deck on the bridge is made of eight triangular sections. There are seven pairs of hydraulic rams set within its balustrades, each set corresponding with the joints along the deck. As these rams extend, they silently push up the handrail, causing the bridge to curl up.

The fourteen rams are powered by one master hydraulic ram set underground. When the curling motion is complete, the two ends of the bridge touch to form an octagon.

How Long Does it Take?

I’ll have to time it next time I’m there but I’d say it takes about a minute to fully curl up. The staff know this is a wonderful photo opportunity so they leave it like that for a few minutes so anyone watching can get some pics. It then takes about another minute to fully unfurl to be a footbridge again.

It’s a beautiful thing to watch as it appears so graceful for something that is so functional. The bridge can be stopped at any point of the ‘curl’ but generally, there’s no need and the operator will only stop it when fully open or fully closed.

When fully open the bridge crosses the inlet and people are allowed to walk over so do try it. It’s very stable for such a temporary structure.

How Can I Find It?

Here’s a map of Paddington and the Rolling Bridge is in the middle. It’s on the other side of the water from the railway station and close to M&S.

Here’s a lovely timelapse of it closing and opening on a summer’s day.

While you’re there, why not see the Fan Bridge too? It also goes over Paddington Basin and does a theatrical opening at the same times. (It’s always one bridge after the other as the same team has to start the operation and they can’t be in two places at the same time.) The Fan Bridge may not operate on days with high winds.

Previous Post: « How To Visit the Sky Garden Without a Ticket
Next Post: MasterPeace Mindful Painting Review »